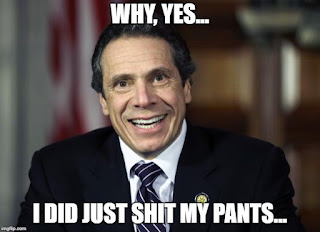 "We see many instances of cities going down like sinking ships to their destruction. There have been such wrecks in the past and surely there will be others in the future, caused by the wickedness of captains and crews, alike. For these are guilty men, whose sin is supreme ignorance of what matters most" -- Plato, Statesmen

This is a most-auspicious occasion, for it marks the first time in history that a man has accomplished the thought-to-be-impossible, and boldly gone where no man had gone before. But, Andrew Cuomo is no ordinary man, and his dogged perseverance, boundless energy, the endless ambition, and all-around shitty personality, gave him the strength and the courage to achieve the Dream.

Oh, they said it couldn't be done! They said the attempt would kill a man! They said the previous performance -- in which Cuomo stood in the flooded wreckage of a ruined city and threatened an electric company with a lawsuit while a multitude of homeless people suffering in the after-effects of a hurricane served as a backdrop -- could never be topped.

Because Priorities, and shit.

They underestimated this intrepid Douchebag, this pioneer of the unplumbed depths of Asshole, this Visionary of Venality. He astounds! There is no low to which he will not stoop in his unending quest to rise, and the trail of destruction and devastation he's left in his wake is a testament to what he's willing to do to everyone else in order to put a death grip on the levers of power. 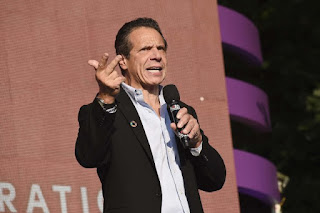 He's perfectly willing to sacrifice you. He's perfectly capable of using your misery as a stepladder. He's well-aware of the price he expects you to pay in order to achieve his dream of one day being the President of the United States.

One day, a paleontologist will find the fossilized nest from whence Andrew Cuomo hatched, like the rest of the dinosaurs, and we may finally gain some insight as to what makes this pathetic shitbag tick. Oh, we think we know that it's just blind ambition, but there must be something deeper. The Dirtbag personality  is just too overbearing; the supply of torment he doles out seems to be endless; the well of intense fucktard runs too deep.

Hillary mimics human expression and empathy better than he does, and we KNOW she's an alien.

I'm inclined to believe he was an abused child. He bears all the hallmarks, nay...the scars...of the abused child: 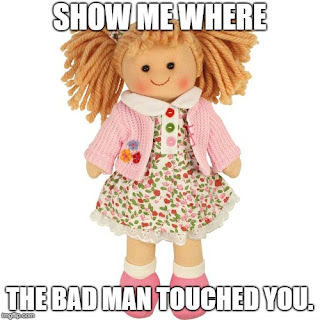 The affected air of superiority that hides a deeper insecurity.

The fragile front of toughness that crumbles at the slightest challenge.

The acute sensitivity to criticism that results in a retaliatory explosion of vicious rhetoric that lasts only so long as no one pushes back.

The bullying personality which is the reflexive affectation of one who has been bullied.

The continuous and intense need to be seen as important, even to have his mere presence not just acknowledged, but celebrated.

The bombast that hides the inner fears and insecurities of a very small, frightened person...with a very small penis, to boot, no doubt.

I'll bet this piece of shit cries himself to sleep every night, teddy bear clutched in desperation to his chest, sucking his thumb. I'll wager he still wets his bed, too. He exists merely to take revenge upon those who he believes have wronged him, who have failed to recognize his greatness, to acknowledge his awesome personage.

Had his father not paved the way towards a career in politics, Andrew Cuomo might have taken another path in his Master Plan to Make Everyone Pay for the accident of birth and the shortchanging by Nature that made him a pile of dogshit most people would avoid like kissing ther grandmother's cold sore. People with this collection of mental traumas and unresolved Daddy issues usually project their hatred towards society by becoming gay, the more-committed and more-deeply-disturbed go all the way and claim transwhateverism, before killing themselves, but this one had been handed a better outlet for his inner turmoil by his more-successful (which is a very low bar, to begin with) father.

Public Service had the additional benefit of forcing society to pick up his probably-enormous bar tab, as well, since it is a well-established fact that abused children are destined for a date with alcoholism.

Listen to Andrew Cuomo speak one time. You will quickly come to the conclusion that no one could be that stupid, no one could believe the utter nonsense that pours forth from his gaping piehole, no one could muster the sheer arrogance on display if he wasn't drunk.

This is not a leader; it is a petty social climber and sycophant, completely lacking in talent, intelligence, and values, who believes he can turn a record of abject failure and association with more-worthy people into a run for the White House.

He married a Kennedy, once. A common douchebag among the Tiffany of Douchebags.

He hitched his wagon to the Clinton machine. The well-connected, East Coast Liberal Douchebag making common cause with the Douchebags of the Ozarks.

See what I mean? He'll climb up the ladder and down into the sewer, as well. It's all about power.

The insufferable windbag is now running for a third term as New York Governor. Any decent human being looking back upon two previous terms of utter failure, bankruptcy, personal scandal, incompetence, a couple of dodged grand juries, would quit while they were ahead. They might feel a pang of conscience and perhaps a shred of guilt, collect whatever dignity they had left, and then crawled off to commit suicide.

Not Andrew Cuomo. No, he's advanced his entire career by fucking up and not being considered important enough for anyone to notice it, and BY GOD, he'll do so again. Why screw with a winning formula?

A failed Housing Secretary who left office one step ahead of a criminal indictment. He's one of the architects of the 2008 Subprime Mortgage Crisis.  He brought that same fiscal skillset to the office of Governor.

New York State is now $63 billion in debt, and it's rising daily. Cuomo's only solution to this problem is to continue to raise taxes. Otherwise, he can't buy votes with tax money like he bought votes for Clinton with no-money-down mortgages.

A failed state Attorney General who used law enforcement as his own private Gestapo against political enemies. Like he was Heinrich Himmler. He used the State Police to spy on the leader of the Assembly GOP.

When Elliot Spitzer forces you to make a public apology for your abuse of power and turns out to be the GOOD GUY in a scandal, you know you're a fuckup.

A failed governor who barely beat a washed-up actress in the last primary and who is frightened to debate his republican challenger in a race he's wining handily on the off-chance that he may fuck it all up. There's a reason why the local papers run pictures of Cuomo in a chicken suit. There's a reason why they write he's a coward.
He believes that all he has to do is threaten to sue someone and this is supposed to serve as an illustration of how effective he is. It's what he's always done.

He is a small man. A petty man. He is a mincing, smarmy, oily prevaricator. His picture is next to "SCUM" in the dictionary (it actually says "See: Cuomo"). If it weren't for AIDS, Ebola, and Malaria, "Cuomo" might make it onto a list of the Most Dangerous Diseases in the World.

Between Cuomo and that other colossal disaster, Bill DeBlasio, they have turned a city and a state that were once one of the greatest places on Earth into a Western version of Mogadishu with skyscrapers.

And now he has achieved what many once thought to be the impossible, and garnered his second Douchebag of the Week Award.

I would offer congratulations, but he might threaten to sue me for it.

Bring it on, Tough Guy.

The Overlord begs you: do not re-elect this miserable bastard. He has no clue as to what he's doing.

Couldn't have said it better myself. I've had to live in his kingdom (think shithole) for all my life. Can't wait till I get to retirement age so I can get the F out.

Well you nailed it! I feel like I'm watching a shripwreck in slowmotion from inside it, unless I ever get out of this state. Whoever is the last one to leave ny don't forget to turn off the lights

Post desperately needs update.
Was blissfully ignorant of this pathetic piece of excrement..
Until this week..
Was astounded by his hubris on one of the many press conferences that I tuned out from.
Finally had to ask the Google machine..
Who is this Douchebag Cuomo...
And found your very enlightening post.
Thanks for the insight.