"Keep your feet on the ground and keep reaching for the stars..." -- Casey Kassem, American Radio Host and voice of "Shaggy" from Scooby-Doo. 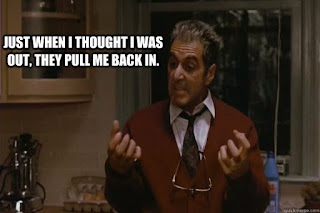 "Elections belong to the People. It's their decision. If they decide to turn their backs to the fire and burn their behinds, they will just have to sit on the blisters..." -- Abraham Lincoln

"When one with honeyed words but evil mind
Persuades the mob, great woes befall the state..." -- Euripides, "Orestes"

"The Government consists of a gang of men exactly like you and me. They have, taking one with another, no special talent for the business of government; they have only a talent for getting and holding office. Their principle device to that end is to search out groups who pant and pine for something they can't get and to promise to give it to them. Nine times out of ten, the promise is worth nothing. The tenth time is made good by looting A to satisfy B. In other words, government is a broker in pillage, and every election is an advance auction sale of stolen goods..." -- H.L. Mencken
Read more »
Posted by Matthew Noto at 6:48 AM No comments:

"Angeles was safe from invasion; the invaders wouldn't find a place to park." -- Robert A. Heinlein

“But under the beards--and this was K.'s real discovery­ --badges of various sizes and colors gleamed on their coat­ collars. They all wore those badges as far he could see. They were all colleagues, these ostensible parties of the right and left, and as he turned round suddently he saw the same badges on the coat collar of the Examining Magistrate, who was sitting quietly watching the scene with his hands on his knees. "So!" cried K. flinging his arms in the air, his sudden enlightenment had to break out, "every man jack of you is an official, I see, you are yourselves the corrupt agents of whom I have been speaking, you've all come rushing here to listen and nose out what you can about me, making a pretense of party divisions, and half of you applauded merely to lead me on, you wanted some practice in fooling an innocent man.” -- Franz Kafka, "The Trial"