Your Government At Work... 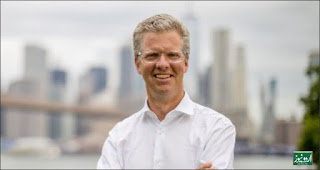 "The Government" is an amorphous blob of about 5 or 6 hundred faces that are the visible pustule that signifies the presence of the underlying disease, and literally millions of nameless, faceless, anonymous, nose-picking morons who only have a job because they managed to pass a watered-down civil service exam with a 62." -- The Overlord.

The picture is of one Shaun Donovan, currently running for Mayor of New York City. The reason why his picture is included will become clearer as you read, Minions.

This past Monday morning I exited the Death Star to find two police officers in my driveway.

I asked them if there was a problem.

They replied, desultorily, in the negative.

And then I heard The Beep.

The cops were here -- in my driveway -- with a hand-held license plate scanner. They're looking for scofflaws to tow off.

The City of New York is now devoting manpower and resources to TRESSPASSING on private property in order to fill quickly-emptying coffers. City government does this as riots have become a daily occurrence, shootings and murders have skyrocketed, the mentally ill are wandering the streets viciously attacking random passers-by almost on a schedule, Asians and Jews are being targeted with regularity by the the rest of The Diversity because of Sino Snot Storm and because they can do math.

But not racism, of course.

This is the legacy of Bill DeBlasio; Manhattan can burn, people can get killed in the streets for being the "wrong" race, 35,000 New Yorkers can die of the flu because the government-run hospitals suck and the governor is in bed with the "healthcare" industry and the Mayor gives his wife $2 billion in "healthcare" money that magically disappears, the Sanitation Department ensures your trash is liberally strewn all over the street so the rats can feast, the cops will practically crawl up your ass to enforce a parking ticket.

There are, as of this writing, on the order of 20 top-flight, handpicked, apparatchik morons currently vying for the democratic party nomination for the Mayoral election in November 2022 (the primaries are this June). They run the gamut from the pie-in-the-sky Marxist/Leninist, to the guy who claims he caught both a leprechaun and a unicorn at Woodstock, to the old and worn-down radical feminist with an itchy vag, barren womb and rage, to the wanna-be hippie and a coterie of People O' Color spewing the same old Social Justice nonsense.

One of them, a man named Shaun Donovan, seems to be getting the most attention by claiming he's Barack Obama's butt buddy. He looks much like you'd expect Beavis (of cartoon fame. I've posted his picture above just so you can laugh) to appear in middle age, touting himself as the "most-successful creator of affordable housing EVAH."

We have recently entered into contract to sell the Death Star and have taken a $90,000 haircut: our once-tony neighborhood is now indicative of the dwindling fortunes of the New Yorker. Our neighbors have sold out, many at break-even or less, just to get out from under their mortgages since many haven't worked for a year. There has been a spate of foreclosures in the neighborhood. A neighborhood which once boasted million-dollar houses in an almost-suburban setting is now overrun by rats, both human and literal, strewn with trash, and crawling with tow trucks looking to gin up impound fees.

The politicians fleece the former for votes and refuse to kill the latter. If you complain about your unsanitary Sanitation Men, they ensure that everyone else's garbage subsequently ends up on your lawn. If you catch the police trespassing on your property without probable cause and ask them what they're doing, they don't have to answer you before they come back in the middle of the night to tow your car (fortunately, no one here has any parking tickets, but that's no guarantee).

I guess if you wanted to be even more-successful at creating "affordable housing", i.e. in creating slums from middle-class neighborhoods, this is EXACTLY how you would do it.

I'm guessing that the new Slums will then go the way of the Old Slums in a few years, which is to say a bunch of seriously retarded Mid-Westerners will move in, gentrify the new ghetto, buying up property at bargain prices and proceed to turn Staten island into a new copy of Madison and Minneapolis, just like they did to Brooklyn, Manhattan and Queens, with the asshole politicians to go with it.

I can't wait to get to closing and leave this place, which will break my heart as a Native New Yorker.

So, I guess this is the best New York democrats can come up with: an Obama retread who reminds you of a stupid, teenaged boy obsessed with his own buttocks, who destroys neighborhoods with government assistance, attempting to gain control of a mindless bureaucracy that cares more about collecting parking fines than about arresting criminals, public health, or maintaining healthy property values as a viable tax base.

Speaking of the incompetence, I received two pieces of mail that reinforce the notion that government is largely a collection of low intelligences pretending to do something vital in return for skimming the taxpayer.

The first is a notice from the New York City Board of Elections, addressed to Mrs. Overlord's father...who died in 2009. Amazingly, he's still a registered voter (and if I recall correctly, a registered democrat, to boot).

This informative little package of fucktard is a wonder. Inside there are directions to your nearest polling place, information on how to acquire an absentee ballot, how to acquire a mail-in ballot, and how to vote early. There's also a delicious little explanation of a new-and-improved form of voting to be tried out for the first time here in New York called "Ranked Choice Voting", which from what I can tell is little more than allowing the losers in any race to get a second -- and maybe even third, fourth or fifth -- bite at the apple.

I found this explanation quite enlightening. And maddening.

A friend, who happens to live in the unmitigated Hell of Minneapolis, informs me that Ranked Choice Voting is how Minnesota (or at least Minneapolis) got all fucked up in the first place.

Now you know why 20 democrats have tossed their hats into the ring. We now have the electoral version of Common Core math -- if you don't get the right answer, well, at least you get credit for trying and we can inch you into a passing grade.

I will refuse to vote for anyone, in any order, except the person I intend to vote for. Period.

The second piece of mail was from the Social Security Administration.

It was a brand new Social Security card.

Addressed to someone with a Spanish name, who does not live here, has never lived here, and as far as I can tell, doesn't even exist.

Remember: highly-paid, unionized idiots who passed a test written by monkeys with a 62.

Apparently, I'm now involved in someone's attempt at identity theft or similar shenanigans. I intend to call the Social Security Administration tomorrow and tell them of the grievous error they have made, but considering the level of degraded intelligence of a federal worker and the lethargy of a professional bureaucracy that can't be fired, I rather doubt anything will be done.

The Swamp is alive and kickin'.
Posted by Matthew Noto at 8:53 PM

Hate to disappoint you, but the civil service (at least at the fed level) does not have an exam anymore. This is due to disparate impact (I'll leave it to you to figure that one out).

I took a Civil Service exam for a job with the Department of Commerce a long time ago. It was a fucking joke. The people I come into contact with who "work" for government on a regular basis -- my garbageman, the people at the DMV, Social Security Administration, Medicare, the NYC Departm4ent of Ed, anything related to NY State -- tend to be of lower-IQ, supremely arrogant and incompetent and possess a streak of entitlement nine miles wide.