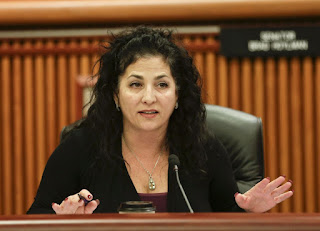 "There is nothing so useless as doing efficiently that which should not be done at all..." -- Peter Drucker

As if Staten Island did not have enough demerits!

Besides being the great repository for what I like to refer to as The Middle Class With No Class, besides having once been New York City's garbage dump, besides being that little dot on the road map between the monstrosity of New York City and the toxic waste dump that is New Jersey, besides having been the breeding grounds for half of the cast of The Jersey Shore, this once idyllic island has had to suffer the non-enlightened "leadership" of perhaps one of the stupidest human beings to ever live.

And that's in a city where the main competition is Alexandria Ocascio-Cortez, no less.

In keeping with the new requirement of being gender neutral in all things, It's name is Diane Savino.

"Who is this Diane Savino you speak of, Oh wise and powerful master?" you ask.

I will answer your earnest question, Minions.

Diane Savino is what you find when you reach under the seat in a movie theater.

Diane Savino is to good taste what a turd in the punchbowl is to a successful party.

Diane Savino is to intelligence what Barack Obama was to serious statesmanship and a winning NCAA bracket.

Diane Savino is -- allegedly -- one of the representatives of this borough to the New York State Senate, an organization which is notorious for not Senate-ing, not representing, and being full of people too stupid to hold a real job.

Savino's real problem -- besides being dumber and duller than corn flakes --  is that she has a penchant for inserting herself into situations she has no business being in, discovering she's spoken before she's thought, being shown up as an idiot in the process, and then responding with a schoolyard retort worthy of Bart Simpson.

In the history of "Stepping on the Rake", Savino is the world record holder.

And it doesn't help that in this age of Twitter and Facebook, that this is where she should manage to find all the ripe opportunities to prove her moron on a daily basis. She is living proof of why you should read an entire thread before responding -- for context.

Then again, like most lefty females, she doesn't know what that is or what it's good for.

And so it is that she stepped on yet another doozy of a rake this fine day, and found herself with several eggs on her fat fucking face (which I'm sure she eagerly licked off, as this woman obviously does not miss many meals. Especially the free ones).

I'll let you be the judge. Behold the wisdom and propriety of the woman who claims to "represent" me.

Now one of the respondents to that thread suggested that Diane should sit down...all the way down...but she can't. There's a tremendous roll of fat and cellulite that's supposed to be the good Senator's thighs in the way.

As a 40-year resident of the island Savino claims to represent, I'd like to say that it has been pretty much common knowledge for many years that Savino is, in fact, retarded.

She is driven to work in the Senate on a short bus.

She was recently congratulated by her peers for going a whole week without drooling on herself.

Savino's picture can be seen next to the entry for "Twatwaffle" in the dictionary.

It's rumored that Savino is so dumb that she only got into Driver's Ed on a legacy admission.

I'm told that in (clown) kollege, she majored in Lunch.

Savino is so stupid that Irish Setters aspire to be as smart as she is.

If brains were dynamite, Diane wouldn't have enough to blow her nose.

You can never accuse Diane Savino of being a Kool-Aid Drinker. She doesn't even make Kool-Aid...she can't figure out how to get two quarts of water into that tiny package.

Diane Savino wanted to have plastic surgery, but the doctor didn't have enough Hefty bags to graft to her face.

This woman is so moronic that she decided a good way to prove herself a capable leader was to become Maxine Waters' translator. apparently, she's been at this for quite a while and still hasn't learned the lesson that when you play with morons, you get moron stuck on you.

This is supposed to be the Chair of the State Committee on Internet and Technology and she hasn't learned that if you're a complete dunce, you stay off Twitter before you're revealed to the entire galaxy as a complete dunce.

Diane Savino is not very bright. That goes without saying, but the real reason why she does this sort of shit is because she's an annoying, virtue-signaling twit whose only talent is for jumping on bandwagons (well, maybe not jumping...that's a lot of keister to be getting airborne). If it wasn't for her ability to jump into the wrong fight on behalf of the wrong person to defend the wrong positions for all the "right" reasons, she'd be useless to the party. Her job is to offer comic relief -- and the bought-and-paid-for-vote -- that keeps people from thinking too hard on just what a racist piece of shit Maxine Waters is.

I like this headline from a recent profile of Savino, which is funny because it can be taken two ways:

Savino Isn't Giving Up on Weed.

You'd think she had to be smoking a lot of it to be this clueless.

She does these things because she has but one political card up her sleeve which is to pander like nobody has ever pandered before. Hilary Clinton could take pandering lessons from this woman and learn an awful lot.

Her "district" is made up of parts of two boroughs. The North Shore of Staten island is a curious mixture of the modern left, which consists of phony "woke" hipsters who gentrify ghettos, the former inhabitants of those ghettoes who live entirely on government cheese, immigrants from West Africa and Sri Lanka, both in constant competition for the title of "Worst Sewer to Be Born In" and "worst-oppressed minority on Staten Island" (oppressed by their own, incidentally), supported by a few limousine libtards living in Todt or Emerson Hill mansions, and the remnants of the old Brooklyn neighborhoods in Dyker Heights and Bay Ridge where FDR is still worshiped by those circling the bowl for eternity on taxpayer largess.

So, defending Maxine Waterbuffalo (far be it from me the misgender the good Congressthingy from CCP-fornia) is par for the course.

So is getting ratioed and showing yourself to be an ignoramus in the attempt.

So it is with great pleasure that we bestow this honor upon someone who could be said to be the biggest and foulest (insert word for "ladyparts" that begins with a "c" here) in all of New York City.