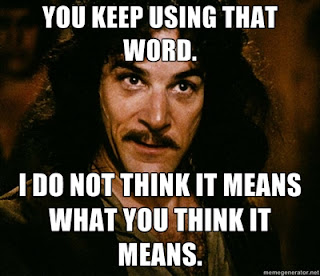 The political left has a strange relationship with the word "Authenticity".

Generally speaking, when a Leftist refers to something as being "inauthentic" what they really mean is "This is the Real McCoy, however, admitting so makes me look stupid, so we'll just pretend otherwise".

Lenin, Stalin, Mao, Pol Pot, the Kims, Castro, Hitler, Mussolini, et. al. were not authentic socialists/communists. "Real" or "True" Socialism and Communism, you see, have never been tried. Those who have adopted the label of "Socialist" or "Communists" only did so so as to hide their true intentions, but NEVER to introduce authentic socialism or communism.

I remember it being said by a great many of the left's "Civil Rights Leaders" (a misnomer: they're racial extortionists running a scam) saying that Barack Obama wasn't "authentically black". Especially that paragon of genuine-ness that is Je$$e Jack$on. The reason why Reverend Retard felt this way about Barry was that it was his belief that a half-black boy raised in the tropical splendor in Hawaii, with all the attendant to middle-class communist views and comforts the fellow travelers all seem to accumulate, Ivy-League-educated, could not relate to the denizens of an inner-city housing project. Je$$e would, of course, change his tune for the money.

Of course a long laundry list of right-wing blacks have been derided as not "authentically black" through the years: Ben Carson, Larry Elder, Ward Connelly, Clarence Thomas, Colin Powell (until he changed sides, natch), Condoleeza Rice, Tim Scott, J.C. Watts, and many more. The reason this coterie of Distinguished Personages were never recognized for their "authenticity" is because they had the audacity to leave the mental plantation the White Leftists have created for their little brown friends, and the little brown friends, dutiful to the last, have to destroy such people before enough of the other little brown friends start to exercise independent judgement...and the political and social welfare the naysayers depend upon to make a living dries up.

Naturally, some of the fakest people on the left are magically identified as "authentic" in a variety of ways, mostly because ideology and the political needs of the moment require that stamp of approval. This is how Bill Clinton becomes a feminist, Hillary Clinton becomes relatable and likable, Maxine Waters an elder stateswoman of impeccable character, Dr. Fauci an infallible fountain of sound medical advice, or how Global Warming/Cooling a New Ice Age Snowfalls are a thing of the past Climate Change based upon a fraudulently-created graph is to be taken as literal truth because "authentic" Science.

It's how we know that Al Gore invented the Internet. He was all authentic when he said it.

Marco Rubio and Ted Cruz are not authentically Hispanic...but Beto O'Rourke is?

It's how no one REALLY found 5,000 WMD's buried in the sands of Iraq: as the ones discovered were "old WMD's" (according to John Kerry) they weren't "authentic" WMD's.

It's why the 2016 Election that elevated Donald Trump to the presidency wasn't authentic, because Russian Collusion and "foreign interference" that was never proven and because the New York Times predicted a Hillary landslide, but the 2020 election -- with copious examples of voter fraud, tampering with voting machines and midnight deliveries of freshly-minted ballots that were impossible to verify --is very certainly and obviously authentic.

So authentic that Joe, Kamala and gang are currently hunkered down behind barbed wire and the National Guard.

Because authentically-elected governments always need to be guarded by tanks, armed soldiers and barricades around government buildings.

The latest example of this tendency to judge what is or isn't "authentic" by the litmus strip of The Needs of the Party involves one Kaitlyn Jenner, formerly Bruce Jenner the Olympic hero, Wheaties Box icon, "reality" television personality, newly-minted "transgendered" and obviously mentally-ill person.

Jenner has recently announced that...she, he, shim?...will run for the office of governor of California.

Considering what presently occupies that office, a deranged person who is confused by...his, its?...own genitals wearing size 15 Kenneth Cole pumps, makeup applied with a trowel, and probably still suffering the after effects of being cooped up inside a house with a bunch of Kardashians under the continuous gaze of cameras, can hardly do worse.

At this point, Gavin Newsome, the loathsome governor of California and all-around turd, could probably be beaten in the next election by Ghengis Khan admitting to chronic pedophilia and running on a platform of rape and pillage.

But then the question of "authenticity" arises. Because it must.

It must because Jenner, at this point, has about as good a chance to win as Ebola running on the Chronically Incelibate Party ticket does.

Anyone who threatens the poster child for Biggest Dumbfuck on The West Coast needs to be destroyed before any voting starts, regardless of their actual chances of winning the election.

But...the transgendered have been elevated to something on the order of an endangered species by the left. They are victims, you see. They are poor, oppressed, downtrodden, innocents who need virtue-signaling libtards everywhere to come out and support them in their never-ending quest to turn every rest room and locker room in America into the new imaginary breeding grounds of invented brutality.

Unless, of course, the New Victim Identity of the day turns out to be a conservative republican.

So, what does one do, if you're a leftard, and you must destroy a potential threat to your power and control, but the usual ad hominem routine runs afoul of leftard orthodoxy because the intended target belongs to a "protected" group?

Why, you pretend the target is not "authentic", is what you do. Retroactively.

You make accusations about them being posers and fakers; you accuse them of not embracing the entire list of invented and assumed characteristics that all _____ have (so much for Diversity!). You assert that their preferred identity is not real and was assumed for a variety of reasons other than it is a preferred identity.

In short, you "other" The Other so that they no longer resemble The Other-who-ticks-off-all-the-right-boxes and they lose the protection of the left.

And then it becomes safe to attack them. Viciously. Continuously. Relentlessly.

It wasn't all that long ago that Kaitlyn Jenner was being celebrated for whatever's "bravery" by coming out as a shemale. The left fell all over itself hurling accolades and well-wishes in Jenner's direction. Why, we came thisclose to changing the spelling of the word  "gender" to "Jennder". Countless news articles; lots of television time; the Oprah/Dr. Phil circuit; The Force knows how many "profiles" of this valiant, daring, culture-smashing, patriarchy-bashing pioneer there were.

Apparently, it was all conditional; it was only meant so long as Jenner was merely a convenient semi-icon. The moment Jenner...ahem...starts pitching on the "wrong" team and suddenly it's all persona non grata. None of it was "real". It was all a Great Big Lie.

That was then, this is now. Right?

(By the way, there are no chicks with dicks -- there are only guys with tits).