Why The Left Needs to Kill Children... 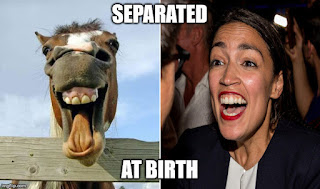 The left is a suicide cult, and it is determined to ensure we all go down with them.

This edition of the Overlord's Collected Wisdom is brought to you courtesy of a Facebook "friend". He asked a simple question, and got a convoluted answer from me, but it is the correct one, I reckon. It was asked in response to this stream of absolute dribble that escaped the gaping maw, and black pit of a brain, of one Alexandria Ocascio-Cortez, the poster child for limited intellect.

As a value-added guffaw, you get the disjointed stupidity of Stacey Abrams, the ultimate example of why Darwin might have been correct, and that it isn't only apes that fling poop.

So, my "friend" makes the following statement/asks the question:

"Please explain something to me that I just can't work out on my own. It is illegal to kill a lot of different animals -- eggs, new-born, or just endangered. The penalties are quite severe.

Why don't we give human babies the same credibility as living organisms as we give turtles and birds and a whole list of animals.

You murdering mf-ers have talked yourselves into an insane non-logic.

Don't we put people in psych wards when they lose their grasp on reality?"

To which the Overlord responded:

1. The Leftist is an eternal adolescent, forever in search for escape from conventional morality, consequences and responsibility.

2. Freedom from moral responsibility and moral consequence can only be secured by a collectivist, totalitarian state, which has the power to eliminate penalty and otherwise legalize despicable behavior.

3. Freedom, to a liberal, refers solely to freedom of the genitalia.

4. All non-sexual individual freedoms are despised by the liberal because they contain within them an element of personal responsibility, self-sacrifice or abstention. Since the leftist abhors responsibility, she also despises freedom, and hence, is willing to surrender her autonomy (and body) to The State.

5. Abortion is necessary to guarantee genital freedom and to further erode the concept of personal responsibility, while eliminating future generations of less-desirable people (as the leftist sees them).Simultaneously, while promoting such as "a right" it allows sociopaths to avoid the guilt that comes with murder.

Essentially, all women must accept abortion as a means of "birth control" so that the sickest among them don't have to feel guilty about killing their own children.

6. The Family stands in opposition to The State, for they must compete for the loyalty of any individual."

This would seem to sum it all up nicely, but there was a ton of context that went uncovered, so I went back and covered it.

What follows is what poured out of my brain. Since I'm not up to re-typing it, I'll just cut-and-paste, so excuse the change to the format.

Now to get a little more complex, so as to understand why the political left exists and why it advocates for what it does.
Society, of it's very nature, is Hierarchal. That is to say, there are essentially three grades of people within it -- The High, The Middle and The Low. Hierarchy is the most common organizational method for all life on this planet; wolf packs have hierarchies (alphas, betas, and so forth), as do pods of dolphins or killer whales; beehives have hierarchies (Queen, Drone, Workers), the principle exists all across the animal kingdom. Hierarchy is a NATURAL organizational response to the problems of survival.
We are born into a hierarchy (the Family) and during the course of our lives will become members of other hierarchies -- schools, work, the bowling league or softball team, our church or political parties. These hierarchies are often in competition with one another, and often they work against one another.
Any individual's status within the hierarchy is dependent upon two factors.
The first is Utility; are you useful to the hierarchy? Does your presence help the hierarchy to achieve it's goals? Do you bring any special quality or skill to the hierarchy that helps it compete or achieve its function?
If the answer is "no", then the hierarchy rejects you.
The second factor is Competence: are you any good at fulfilling your particular role within the hierarchy? Competence also allows one to rise within the hierarchy, so that one's position -- and thus one's status -- becomes more easily assured. There's a reason why the most-competent people usually rise to positions of leadership, and this is because they are most useful to the Hierarchy.
If the answer is "No, I'm incompetent", then the hierarchy, again, spits you out.
And since talent, competence and utility are unequally distributed among individuals, the rewards are also unequally distributed.
This SPECIFICALLY is why the political left exists -- because society continues to produce people who are either useless or incompetent, or both. If these people did not at least have the feeling (if not the actual fact) that someone was looking after them and their interests, they would only become a disruptive force, and, therefore, a threat to the hierarchy, in general, and society, specifically.
This is all about STATUS. Not rights, not ideology, not even the unequal distribution of wealth. Where do the useless/incompetent fit in, if anywhere, and what can be crowbarred out of society to maintain peace by paying them off to be non-disruptive.

There are some political/social philosophies who insist that since hierarchy is here to stay, the major question we have to answer is "what sort of hierarchy are we to have?".
For the left, the answer is "not the one we have", because as the hierarchy stands, it leaves the leftist in limbo in terms of their status. So long as hierarchy rewards success and punishes failure, the useless and incompetent who make up the leftist rank-and-file are in constant danger of being excluded from all aspects of human activity, and certainly from the rewards that come with being a member of the hierarchy.
This means the current forms of hierarchy have to be destroyed, since attempting to reform them over several centuries resulted in few changes (or none the leftists will admit to) at all.
What underpins our current hierarchal system (i.e. Western Civilization)?
The short list begins with Family, Law and Order, respect for individual rights, capitalism, civic responsibility, civic militarism, and secular rationalism.
These ideals have to be destroyed so as to bring about the opportunity to install a new form of hierarchy (at present, the left is still stuck on collectivism, because useless and incompetent). So, take a look at what the leftist attacks the most-vigorously in order to get some idea of why they think and behave the way they do, and why they're willing to fight to the bitter end to get their way.
The family is under constant assault. It is being redefined so as to erase traditional notions of the nuclear family. Children have to be killed as a matter of convenience or as birth control of last resort, so that the family cannot perpetuate itself. Children have to be indoctrinated in the ways of extreme sexual behaviors so as to erode the Male/Female relationship dialectic which is the foundation of family. Assisted suicide ensures those at the top of the familial hierarchy -- Patriarchs and Matriarchs -- are treated as disposable. National Health Systems ration care so as to eliminate the elderly and infirm.
The Welfare State assumes the role of the provider.
The Law is continuously undermined, ignored, or changed by unelected government workers -- judges, bureaucrats -- who are unanswerable to the electorate for what they do. When the left cannot get what it wants by means of legislation or vote, it invariably turns to bureaucrats and judges, or even international bodies, to subvert the will of voters and the activities of legally-constituted legislatures.
As previously discussed, any right to which the Leftist either has some aversion or cannot share in because useless and incompetent, is to be eliminated. If the leftist cannot make her case with speech, then freedom of speech must be eliminated. If people with guns stand in the way of the reordering of society, then their guns must be taken away. If the notions of citizenship and nationalism threaten to prevent the leftist wet dream, then citizenship must be rendered worthless and the nation diluted with millions of imported scabs.

Capitalism is the most-successful system for securing individual rights and status yet invented by humans, and therefore, it is a direct threat to those who would destroy the hierarchy as it now stands, because they have nothing that offers similar results or rewards.
Only in the modern West is it possible for students to attend a university (a by-product of capitalism), usually on borrowed money (a by-product of capitalism), to be instructed by socialists who are paid with the by-products of capitalism, that capitalism itself is an evil thing and not worth pursuing. As a consequence, the student ends up with a degree in something capitalism has no use for -- and so is unwilling to pay for -- the student is left in debt with a doubtful future, and capitalism is solely to blame...but the socialists all got paid.
The ability, and willingness, to defend the hierarchy in it's current form distresses the left to no end. This is why it despises police officers and soldiers; its why it does its best to nullify law by non-compliance; it is why tens of thousands of stupid teenagers are roaming the streets practicing Fascism under the mistaken impression they're anti-Fascists. If there are those who will defend the hierarchy, and exercise responsible trusteeship of it, then the left is fucked, for it cannot effectively fight back -- because useless and incompetent.

It is only when the left has control of the state that it is able to enforce it's will.
Secular rationalism -- the system by which ideas are examined free from the influence of monarch, priests, and associated parasites -- is under attack because if people were able to think for themselves, if they were told the truth about the world and circumstances they live in, if they were able to make informed choices or their own decisions, they would invariably find against the leftist.
So, men can get pregnant. Women are always victims, never perpetrators or instigators. A negative GDP is a sign of a strong economy. Inflation is good and not a detriment to wages and savings. Taking guns away from the innocent so that they are helpless against the deranged and homicidal is all about safety and "the children": apparently, children should only ever be killed by a doctor, or starved to death by a government-manufactured baby food crisis, not by some psycho with an "assault rifle".
Objective reality must be ignored. Where it cannot be ignored, it must be denied. When it cannot be ignored or denied, just insist that there is no such thing as objective realty, that truth is relative and subjective.
Eventually, you'll get to be as good at it as AOC is: for while she spouts off constantly about the dangers to American society as being racism, white supremacy and the rich, she certainly seems to have had no trouble taking an engagement ring from a very wealthy white guy.
Why? Because she's marrying UP. She's improving her STATUS in a way that leftist politics can never do, but which the traditional hierarchy does on a routine basis.