You All Suck (#52 - Arguing With Idiots Edition) 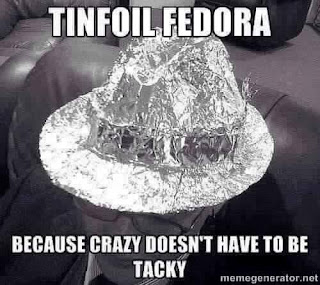 The first variety is simply an idiot. I mean as in "not very bright" and "probably took the short bus to school" type idiots. IQ's of this type can be measured in double digits, and their attention span measured in RPMs. Extended thought, say beyond four seconds, causes them extreme physical pain, so it's best to not think.

The second is someone who is usually scatterbrained in the sense that they cannot properly process information. Their brains work in three speeds -- Slow, Dead Slow and Dead Slow In Reverse. These people should be medically experimented upon.

The third is the person who simply repeats something they've heard or read without truly understanding it, but it sounded smart, and so they will go on repeating it forever. This sort is not interested in things like facts, evidence, truth or validity, they just wish to hide the fact they they might be retarded for fear of embarrassment.

The fourth category is the kind of person whose thought process is inverted. That is, they work backwards from a conclusion and even then will only accept evidence or proofs which validate the conclusion. They will even ignore their own, personal experience -- they are capable of ignoring or forgetting, for example, that they were either directly involved in, present at, witnessed, or received from a reliable source about someone or an event-- in the quest to prove the conclusion correct.

When all four of these categories are present in what you assume is a human being, you get A Conspiracy Theorist.

Now, before I tear this group of morons a new one, I just want to declare that sometimes the Conspiracy Theorist is right -- there is, or was, a conspiracy. But this happens with the same frequency that one might expect is operative when you've been dealt a natural straight flush, when one is hit by lightning multiple times in the same day, or when Kamala Harris completes a coherent sentence.

"Even a blind squirrel sometimes finds an acorn" ,as they say.

The primary handicap that the Conspiracy Theorist suffers from is the belief that things happen in a vacuum. When discussing a particular event, there is no context. They don't know (or conveniently ignore) what else was happening while the event took place, directly before it took place, and what may have come after. Assumptions take the place of facts which are often easily found and verified. Where evidence lacks, this is, in fact, believed to be evidence of the conspiracy.

After all, "They" wouldn't leave evidence behind, would they?

The second impediment is the inability to sometimes accept that such-and-such a thing occurred. Often, the event in question is such a shock or is believed to be outside of the realm of possibility, that when it actually occurs, it can't be real. Human beings have a great power to deceive themselves, or to imagine that what they experience is not really what they experience. It's why we have "trans" people, or Holocaust deniers, or people who believe that there's still mercury present in modern vaccines, for examples. This ability to ignore objective reality is a defense mechanism that lurks deep inside the human psyche.

If we don't believe it, if we don't WANT to believe it because truth is just too difficult to understand, then we have the tools to make ourselves believe that it never happened. Or, better yet, to construct an alternate string of events that protects us from reality, which is just too frightening for some people to handle.

So, an explanation other than Reality must be invented. This is The Conclusion. This Conclusion, no matter how flawed and lacking in supporting evidence, must be defended at all costs. Otherwise, the mental deficient who holds it will either have to suffer the trauma of admitting Reality exists, or will be shown up for the fucktard they truly are.

Here's how the mental scam works:

2. Work backwards through (usually carefully-selected) evidence (some of it for real, most of it little more than hearsay or speculation). Ignore anything which may call single-thread evidence into question, or select evidence that can only fit the Conclusion by means of stripping it of all context.

3. Defend Conclusion by insisting that any evidence that may undermine it is "flawed", "fake", "non-existent", or was produced or presented as a deliberate attempt to "hide the truth".

4. Insist that anyone who can provide definitive evidence or proof is any and all of the following:

Has a hidden agenda that only the Conspiracy Theorist can detect.

Is an agent of (any or all of the following) CIA, Mossad, Illuminati, Freemasons, Boy Scouts, Professional Bowlers Association, political operative, has stock or other financial stake in something, is misinformed (even if said "agent" is an Honest-to-Christ expert on the subject), brainwashed, or even a part of an organized Conspiracy against the "Truth Seeker" (who is obviously suffering from paranoia).

5. Insist that evidence has been manufactured, disparage the sources of inconvenient evidence (even a source or evidence that the Conspiracy Theorist has himself used in the past in relation to another Conspiracy), that evidence is somehow "tainted", that eyewitnesses and personal experiences are unreliable. Deliberately misrepresent or ignore evidence and facts out of hand.

6. Blame The Jews. Because, you know, people who are that rich, have that much power, and can control the weather only sit around Europe to be slaughtered for 2,000 years or are engaged in an existential fight for a piece of desert your cat wouldn't use as a litterbox for strictly nefarious purposes, all centered on World Domination and the New World Order.

The really committed (no pun intended) nuts skip 1-through-5 and just go Hell-for-Leather for 6.

And, just to complete the Circle (Jerk) of Dumbfuck, the Conspiracy Theorist will accuse his opponent of being a close-minded ass, who simply has been unable to withstand the furious assault against their own ignorance...and then they block you and continue shitposting to you secure in the knowledge that you cannot respond without addressing your counterpoint(s) and evidence.

Usually for the benefit of the other morons in the peanut gallery, so that they can look all smart and brave and shit for having vanquished "a troll".

I don't know why I keep doing this.

Actually, I know damned well why I keep doing this.

I cannot tolerate morons. And so I set out to slay them wherever I find them. I am a Moron-seeking missile, and I love a good fight.

And they are oh-so-easy to discover.

I've seen them all.

The 9/11 Truthers who insist that my having actually been at Ground Zero at the time of the attack is all a lie I tell to make myself "look good", or to appear "more-important" than I really am, or to exaggerate my role or experience for sympathy, or just a story I tell because the KGB/Council on Foreign Relations/Frankfurt School/4H Club paid me to tell it. Complete strangers who don't know me just assume I'm a liar, probably because everyone they know (that would be the multiple voices inside their own heads) is a liar and they probably know they pathologically lie themselves.

The people who argue with me over Coronavirus, despite the fact that I've actually had one (pre-COVID), and have seen and experienced things like Remdesivir and Hydroxychloroquine saving Mrs. Overlord's life when she had it, too. I couldn't POSSIBLY understand what doctors do because I didn't go to medical school (You did? Then why are you a 60-year-old virgin living in your mother's basement making YouTube videos in a tin foil hat?). Despite having an IQ in excess of 150, and direct experience with a respiratory case in my own fucking house for 12 years, I couldn't POSSIBLY fathom how a virus works, how medicines do what they do, or understand what a respirator does (I only operate one for 8-12 hours a day).

The revisionist historians and armchair scientists who believe in Magic Bullets, Jews instigating Pearl Harbor so that we could fight the Nazis for them, Roswell Aliens, Bigfoot, Nessie, Abominable Snowmen and that psoriasis was a government plot to get us all to eat raw fluoride three meals a day on behalf of the Rockefellers and Rothchilds and the Pope. I have only studied history since the time I could read, once considered taking it up as a profession, and have kept my passion for it all these years.

This sort of insanity is far worse than those other pernicious forms, which are Religion and Leftism.

But that is for another day.

When I am finally made Dictator of this stretch of the Universe, rest assured the first people I will be coming for are the Idiots.

It is the only way to save the INTELLIGENT life in this Universe.

In the meantime, I have to find myself a less-aggravating hobby.

In the first 70 or so years of my life, I have believed as you have stated above. The standard wacky stuff, Bigfoot, flat earth, the Jews, etc I still think that way. But in the last couple of years of dealing with our betters/leftists has made it difficult to dismiss out of hand conspiracy theories about them.

It's hardly "a conspiracy" when it's done in the open.

Then it's just being an asshole.

You forgot one class ---

The bloviating narcissist who thinks he knows a lot, but is really a moron, and who refuses to back down even when shown evidence to the contrary.

That would be you, jerkface.

I'll bet you thought really hard about that all morning before it fell out of your diaper.

Limp-wristed and unoriginal retort identified. Looks like you hit the target.

I rarely miss when it comes to stupid.