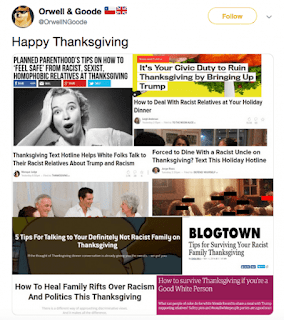 "(A Holiday) is a restoring thing, which, by a blast of magic turns Man into himself." -- G.K. Chesterton


The Bird has been consumed, the wine has been drunk, the confections, various and sundry, have put an additional 12 pounds upon every derriere in America.

Of all the holidays, Thanksgiving will always be my second favorite, my first being the other excuse to eat like there's no tomorrow, the traditional Italian celebration of Christmas Eve which is always expressed in the tour de cuisine known as The Feast of the Seven Fish.

Red Lobster, eat your heart out.

Just a few things to say about this now-departed day of debauchery.

With regards to the photograph at the top of this screed: this is a cliche. It is so cliched as to have other cliches -- were they capable of expression -- scream out about how fucking cliched that meme is.

Of course, if it's cliched, clinging desperately to the past, tired and clapped-out, it must be a favorite meme of the American Left, which hasn't had a new idea since Lenin, and which, despite referring to itself as "Progressive" still lives in the mental atmosphere of yesterday, where we're all in mortal danger of seeing a reintroduction of slavery, the relegation of women to second class status, at the mercy of robber barons, and continuing to fight battles that have already been won.

The collection of articles, memes, hotline numbers, advice columns, etc., stuck together in that collage all come from publications or organizations that are decidedly leftist in orientation. It is demonstrative, I think, about what sort of mental anguish the average lefty dwells in; it is apparent that what they truly hate and fear, perhaps more than anything, might be their own families, and as proof of that hypothesis I offer the argument that if you have to be given advice on how to "deal" with your own relatives, you're probably emotionally unstable.

Which brings up a secondary point: if you dread having to "deal" with your cliched bigoted uncle, if you wish to avoid being in a situation where you might be engaged in conflict, if the very thought of having to be exposed to ideas and speech you find appalling sends you into a panicked state that can only be eased with advice from Planned Parenthood, then perhaps you'd best stay home, anyway?

It is a truism in the recognition and treatment of anxiety disorders that the biggest obstacle to overcoming them is often the process of anticipatory anxiety. That is, being so anxious about potentially being anxious that this self-generated anxiety can trigger a full-blown panic attack all on it's own.

If you have to prepare for a family holiday as if it were a military operation and regard it as something akin to a battery-acid enema, and have the Suicide Prevention number handy, to boot, then you're getting this holiday thing all wrong.

It's also an indication of some kind of passive-aggressive self-validation exercise: you actually WANT to have those arguments, in fact, you crave those arguments, only knowing before you go in that you can't win (and let's be honest: you will have started the majority of them through some combination of virtue signalling, hyper-sensitivity, a misdirected sense of woke, and a large dose of stupid) .

In the end, you will emerge battered and bloody for all your retard, but somehow still convinced you're a superior person compared to the Neanderthal personalities you've just encountered and have had your sense of victimhood reinforced, because now you feel bad and embarrassed by just how fucking dumb and intellectually helpless you are.

This, more than anything -- the merest anticipation of butthurt -- means you must come pre-equipped with coping mechanisms supplied by Huffington Post and Vox. The anticipation of being victimized -- of deliberately taking part in your own victimization -- confirms your belief that it is everyone else who has the problem.

All because Aunt Betty's house may not have a Safe-Space with cocoa, blankets and therapy pets.

This all says far more about you than it does your "sexist" Uncle Bob.

It is true that we do not get to pick our relatives. Nowhere is this axiom more evident than in the accident of birth.

For here I am, this brilliant, talented, multi-faceted galactic dictator, and I seem to have been brought into this world by someone who, on a good day, might be able to find her own backside with both hands and a road map.

This is not to say that Mother Overlord is a terrible person; far from it. In her own fashion, she is a decent enough human being, perhaps no different than billions of others. It's just that self-awareness is not her strong suit, and an over-developed sense of self-interest is perhaps her greatest weakness.

It begins, as all of these holiday kerfuffles do, with the Overlord having to make the great trek to the ass-end of the galaxy, located in the semi-industrial/semi-residential toxic miasma that is Freehold, New Jersey, on Wednesday. This requires a 3-hour round trip in the Nissan Tie Fighter, which will be overheated to the point of inducing dehydration because late November is not exactly known to be balmy in the American Northeast and because a woman wrapped in both a sweater and a down coat might actually freeze to death in the pre-winter chill. It has to be warm enough for cacti to grow in here because otherwise she will complain every fucking second of every fucking minute that she's cold.

(Whenever I hear this "I'm Cold" routine, I have thoughts of how cold she'll be in the freezer at the morgue, because I'm not rushing out to claim the body when that day comes. We do not have a normal Mother/Son relationship; due to two divorces and the necessity of my having to support the family as a young man, I'm more like her third ex-husband. Don't get me wrong: I don't want anything terrible to happen to her, just that if it does, make certain it's fatal, otherwise I'll have to listen to her whining).

I still wear t-shirts and shorts in this weather and get by well enough in a pair of jeans and a hoodie, so much so that my fleece is sitting on the passenger seat the entire ride. As befits her sense of importance (and chronic neuroses concerning everyone's driving, including that of every other vehicle on the road), Mother Overlord sits in the back, loudly wondering why "they" don't put more seat belts back there. The trip goes something like this:

"Matthew, slow down...you're going too fast!" (a glance at the speedo indicates 35 mph, because traffic).

"Watch out around here...they fly."

"Be careful: the cops are out, and these guys do not fool around...". (to date: I have never gotten a ticket with my mother in the car, ever, and never on Route 9, which has stoplights every mile or so. I couldn't speed, even if I wanted to).

"There's always accidents here, be careful!" (this happens to be any intersection where there's liable to be more than two cars)

In addition, I can hear her sucking her breath in and jamming on an imaginary brake pedal; there's a continuous invocation of the deity made under her breath. She might as well hold a novena back there; my driving habits, as well as everyone else's, are open to criticism from someone who does not drive and never has. It's exhausting.

Upon reaching our destination (my Sister's home, because no way is that woman staying with me), I took the opportunity to unwind for a few minutes by turning on the television. FoxNews happens to be on, and to my great surprise (Smell that? That was sarcasm) some over-excited ex-hippie who still believes communism will work is complaining about Donald Trump.

Mother Overlord asks how I can watch such blatant lies. She is not referring to the hippie, but rather FoxNews. After all, "everyone" knows Donald Trump is a liar.

And here it was: the time that I had both prayed for and dreaded; time to put my own mother in her place.

"What has Trump lied about?"

"Everything. The Man is a born liar."

"What, specifically, has he lied about?"

"He lied about tax cuts. No one got a tax cut."

"Umm, you don't get the tax cut until you file taxes next year. Didn't you know that? Besides, you're disabled: you don't pay taxes, anyway."

"Again, what has he lied about?"

"You know. Everything. The man lies every time he opens his mouth."

"No, I don't know. You don't either; that's why you can't answer my question. Perhaps politics and objective reality are not your areas of expertise?"

"What does that mean?"

"It means you should probably stop regurgitating Rachel Maddow. Who IS a proven liar" (Mother Overlord is a devotee of the Manchild of (P)MSNBC).

From her point of view, if someone isn't giving her something she doesn't deserve or qualify for then she's oppressed and everyone is a liar and a thief. This is a defect built into the Baby Boomer. It is the sum of all experience of the 1960's. This is why Medicare needs to be abolished because 80 million of these fucktards are now retiring and will have nothing better to do than to vote themselves more benefits and insist that anyone who disagrees with them is a lying fascist.

No need to keep this mindset alive.

Thanksgiving dinner took place in Mrs. Overlord's aunt's home. Thankfully, the dinner itself was cooked by her son-in-law, a fireman AND an Italian, which meant the food would not be prepared in the typical Irish fashion, that is to say, all boiled within an inch of its life, on the verge of turning grey, originating in a box or cans, and blander than a Clinton criminal deposition.

Mrs. Overlord's Cousin and Son-in-Law have two children: two adorable little girls. They love the Overlord, and he adores them. There is a surprisingly warm spot in the Overlord's cybernetic heart for small children. There are games; there is story time; there is laughter.

And then the bird comes out.

And the six year old, impatient at having to wait before eating, is busily digging in her nose and then picking pieces of the bird off to put in her mouth, licking her fingers the whole time, and then repeating the process. The Overlord issues a corrective, gently, without a raised voice about how we don't pick our nose; how we don't touch food after picking our nose; about how we don't slobber all over our fingers and then touch more food. The child find this funny and digs in her nose once more and wipes her finger on the turkey. She finds this wildly amusing.

Good thing there was ham, too.

A pity that FoxNews did not thoughtfully provide me with a hyperlink or a taped video segment on how to deal with this sort of relative.

Other than a Thanksgiving feast covered in snot, there is one minor drawback to children; they are walking germ factories and I now have some sort of viral infection. Perhaps the six year old had her fingers in everything else before it got to the table?
Posted by Matthew Noto at 9:02 AM