You All Suck (Example #20 - Evil Spock Explains All) 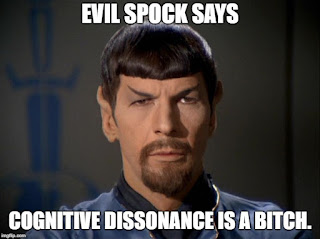 "He wears a mask, and his face grows to fit it." -- George Orwell, "Shooting an Elephant"
I had plans of beginning this with some sort of elegant preface that encapsulates some form of Elemental Truth, but words fail me at the moment. Somehow, somewhere, a great transformation has taken place. Silently, and without the great tumult that typically precedes a volcanic event, the fundamental nature of belief changed in America. We lived in a certain world yesterday,and today the world bears no resemblance to what we once knew.

So, we're just going to go with a Star Trek theme.

I feel as if I'm in that episode of Star Trek, you know the one where Kirk and cohorts step into the transporter beam during an ion storm, and emerge in an alternate universe, where Sulu isn't gay and Spock grew a Flavor Saver?

At first I had thought that perhaps I might have been caught in a wonky transporter beam and whisked away to an alien dimension where all that I once knew was reflected in opposites.

Liberal democrats suddenly had an unnatural respect for law and order, and absolutely adored Special Prosecutors that looked into stuff that was "just about sex". Meanwhile back in my universe, they were only calling cops racist murderers (who should be the only people with guns, because school shootings) and insisting Special Prosecutors only existed to go on witch hunts against consenting democrats (small "d" intentional) at least until they had a consenting republican to go after. The people who said that ramming a cigar in a fat chick's snizz and serial rape was "a private matter", now gleefully repeat rumors (they paid for) of Slavic Whores, Golden Showers, and Porn Stars, and scream about the "Dignity" of the Presidency being of paramount importance.

Suddenly, I was to discover that George W. Bush, Mitt Romney and John McCain were regarded as great, elder statesmen, whereas back in my dimension they were considered a retarded monkey, a sexist and uncaring bastard who gave people cancer, and an old geezer that should shut the fuck up for having elevating a nasally inbred far above her station, respectively.

The Left that I once knew, which passionately, consistently, often condescendingly, assured us for a century that the evils of Russian Communism and the ways of the Wily Red Menace, bent on World Domination and the Enslavement of Planet Earth, were all figments of our fevered imaginations, that we had created our own bugbear out of ignorance and misunderstanding, now sees Reds Under Every Bed. That the Red Baiting McCarthy-- who never caught a communist,they said --  should now be canonized as the Patron Saint of Foresight.

I have a very weak grasp upon a wispy notion that at one time people who routinely denounced the practice of interfering and influencing other countries' elections, but did so anyway, were now perturbed that someone may have interfered with one they rigged, and couldn't stop shouting at the injustice of it all, and the threat to our democracy this entailed.

I can recall, although it's through a haze which must be a side-effect of being transported inter-dimensionally, for a fleeting second,that people who once said that taking a stance against illegal immigration, restricting immigration from countries where there were known problems and terrorists, undesirables, and unassimilables, was racist and selfish, and that eschewing National Interest in the quest to be better neighbors to the rest of the Planet was essential to Peace, are now suddenly screaming of the need for better national security after someone hacked their servers.

There is something, I vaguely remember, about an argument that giving government the power to pry into people's personal lives through secret courts, no-warrant-needed espionage methods, misinformation, deliberate abuse of Due Process, entrapment, abuse of prosecutorial discretion, and using state courts to investigate federal matters, would all result in the virtual end of Civil Liberties, now arguing that abuse of that system is sometimes a necessary evil, appropriate in order to maintain power in the name of democracy, a routine operation, no big deal, a guarantee of freedom.

My head swam. A clammy chill ran up my spine. No, this could not be happening!

Where was my Uhura to pull a knife on Sulu?

Was Scotty working feverishly to re-balance the transporter power to send me back?

I recoiled in horror. It can't get any worse.

And then my bowels turned to ice, for the greater horror made it's appearance (cue music stab).

Something that I used to recognize as The Right showed up.

It went on about bakers being forced to bake cakes, speakers not being allowed to speak, and getting revenge for the firing of television stars for Tweeting offensive things, and then I had a distant memory of when the same Right had said something about the right of a private enterprise (not Starship Enterprise) to run itself as it saw fit to when it came to wedding cakes.

It looked like the Right I had remembered, which once railed against the democracy-crushing phantom of the Cult of Personality that had once done such great and unspeakable damage to the Republic when it was only half-white, telling a woman to put some ice on it, or playing Brooklyn Bridge with Marilyn Monroe and his brother, advancing under the banners of it's own Personality, it's acolytes leading it in prayers that began "Make America Great Again" and ended, not with an "amen", but a "Covfefe".

Why, if it wasn't for Evil Spock, who correctly -- logically, of course -- divined my plight, and then jammed his fingers in Dr. McCoy's ass to do the Alternate-Universe Vulcan Prostate Probe in order to get the full story, I might still be trapped, forever, in a world where everything is backwards, upside down, inside out.

Evil Spock would save the day!

For after having Sulu reassigned to the laundry room, ordering Chekov's long-overdue gender-reassignment surgery, and taking another run at McCoy's taint because he found it "fascinating", Evil Spock told me the truth.

I had been in my natural dimension and universe all along, it's just that the ship's crew had all gone batshit insane. There would be no transporter miracle for me. Spock reminded me: You All Suck.

And here I must depart the alternate world of Star Trek to address the issues of this one.

It would seem that people have lost their shit to the point where everyone has an advanced case of Cognitive Dissonance, where 50 years of American political discourse (as stupid as it usually is) has reversed polarity.

The Left now embraces those things the Right once held sacred; The Right abandons it's own stated principles to behave like Lefties.

I would say this is just Human Nature at work. Then again, I've always hated Human Nature because it's a disgusting thing to behold in all it's awful glory.

The roles have reversed, and the stink of it is that it is all related to a struggle for power between two groups of people who, on a good day, might be able to find their own asses with both hands and a flashlight, and who once occupied the fringes of the body politic until they fed upon one another creating two morbidly obese jerkoffs taking up half the seats in the house.

One end lives in gated communities built on ghettos while decrying the lack of Affordable Housing, and believes that everyone who disagrees with their unreasonable and nonsensical bullshit is ignorant, otherwise they'd see the logic and intelligence in denying Objective Reality, too. It believes it has a paternalistic duty to tell everyone what to think, how to live, and what they can say, while not really giving a fuck about how others might take those orders or how they feel about them. It is a bunch of elitist jerks who practice a form of backhanded racism and sexism that it cloaks in sham production of high ideals and higher morals, and then it flagellates itself over it's own skin color and gender as a means of buying itself an indulgence. It attacks the privileges that it says others have stolen, but never gives up the privileges the real thieves shared with them, or bequeathed them. It demands conformity in the name of BOTH Diversity and Individuality, because ______ -ism, that's when it isn't pigeon-holing everyone on the basis of their skin color, gender, what they like to put in their asses, level of dependency upon government, and so forth, and always "for the children" that they want to kill because a pregnancy can wreck your social life.

The other consists of petty people, many of whom have often never traveled more than 100 miles from the mud puddle they were born in, who just want revenge against The Guy in the Gated Community because that guy has made him feel stupid and unsophisticated (you just might be, Goober!), spit all over his cherished traditions, shit all over his phony-baloney religion, and ignored his needs, mostly because this idiot did not have a fucking clue as to how to defend his cherished traditions, expand the influence of his religion without coming off as a sanctimonious douche out to establish a theocracy, or how to use the powers of government to advance his own agenda, and proves it by merely mimicking what that Other Guy did, matching him in obnoxious, but surpassing him in fucktard, but never developing a superior Modus Operandi of his own. This bunch protests that it isn't just a bunch of redneck, Bible-thumpers who will vote for pedophiles, because Ten Commandments, unfairly tarred as racists, but then it dances with glee because black football players have been told, in effect, to "Get off your knee, Boy".

Both species of asshole believe they have the right to tell everyone else how to live. Considering the turmoil both have caused -- rigging elections, punishing the innocent for the sins of the guilty through boycotts (but don't worry, Peon: your impending unemployment and bankruptcy is all for a good cause, we just don't know what that cause is, yet), enforcing standards of speech and behavior which turn everyone else into a traitor or criminal, crushing individuals for the sake of making The Other Guy dance to your tune for five fucking minutes 00 I'm surprised normal, right-thinking (as in "possessed of common sense") people haven't shot them to death in huge numbers.

The pot calls the leopard black, the kettle changes his spots.

I've had it. I might have to set my phaser to kill.

But first, I have this green bitch to screw....later haters!