Been extremely busy this past week, so no time to write. However, here's a few tidbits to tide you over, Minions.

1. Reported today that Chlamydia Kamala Harris has COVID-19, and that said virus was detected by both nasal and PCR tests.

The question I have is this: Is COVID really so strong that you can detect it under what I assume are several thick layers of HPV, herpes, and perhaps gonorrhea?

If Kamala should happen to kick the bucket because of the Wu Tang Thang, and Joe should happen to finally succumb to that slow-motion stroke he's been having for the last decade, this means that Nancy Pelosi, Grandma Winebox, herself, would become President.

I fucking HATE COVID for making me pray for the continued health of President Depends. This is not fucking fair. You couldn't have designed a shittier situation on purpose, but it has somehow come to pass that I have to root for the two worst individuals in America to survive.

2. On Elon Musk: it is rich, indeed, watching the Blue Check, "professional" media go ballistic over the idea that a billionaire...gasp! a fucking BILLIONAIRE!...now own Twitter, as if billionaires owning multi-national media corporations wasn't already as common as Kamala's lipstick inside Willie Brown's BVD's.

The real problem here for the pearl-clutchers in the Fourth Estate (and Fifth Column) is that Twitter isn't really a "media" company: it is simply where complete idiots go to unleash their inner fucktard in 280 characters or less, minute-by-minute, under the faulty assumption that people actually care what you fucking do all day?

Under that sort of regime, Twitter was the perfect platform for the shallow thinkers and miniscule intellects who practice "journalism".

What Twitter truly is is a means of bombarding the public every second of every day with complete nonsense. In that regard it was also the perfect platform for people whose living involves congenital lying.

For, as Josef Goebbels once said (the poster child for American J-Schools), if you can repeat a lie often enough, pretty soon it becomes the truth.

And, finally, that "Blue Check" became a mark of status in an industry (and political movement) obsessed with status, and raised to believe that such distinctions can be bestowed upon you by virtue of some cosmic formula that even they don't understand. In the grand scheme of things, a Twitter "Blue Check" doesn't hold the same cache, as say, a Nobel Prize, but among the inbred (in the sense that all they do is talk to and about one another) world of "big media", it's like getting the permanent award of "Employee of the Month" at Taco Bell.

See, it's not the gravitas of the award that counts (see: Pulitzer Prize) as much as the ability to garner as many shiny objects as possible for display upon the virtual mantlepiece. When you can't get quality, quantity will suffice.

And when you consider that this is a "profession" that, for all intents and purposes, doesn't require a great deal of ability -- after all, "news" happens all on it's own, and when your contribution to the process is limited to reading other people's Tweets and maybe doing a Google search you're not exactly working at anything -- the little things mean a lot.

They mean an awful lot when you're a member of a generation that got -- and routinely expects -- to be rewarded for coming in last and for almost passing.

If Elon Musk does half of what he's said he would to Twitter, in terms of how content is being suppressed, these little bastards are going to lose their ability to punch above their weight, and rack up invisible distinctions -- that are really more about class than ability -- that only appear more-impressive than they really are.

And this gives them all The Sadz.

Also, also, finally -- people like Taylor Lorenz will soon discover that every nasty, underhanded, foul, maniacal thing they've ever done will be exposed for all the world to see, and there will be nowhere for them to hide.

I hope Taylor will like her future career at Forever Twenty One.

3. Elon, may I ask you to buy Facebook next?

Just a bit of stupidity which is indicative of how Facenazi operates and the appalling talent levels of the H1-B visa hires, is this (see below):

WTF, Facebook?
You tell me I have "memories" to look back on today, and then there's a message saying "content is not available".
So, does this mean that my own memory has been censored? Is my own memory not available? What is the point of encouraging me to share a memory that is not available?
Just asking if anyone over there has half a fucking brain.
Maybe Elon should buy you, too. 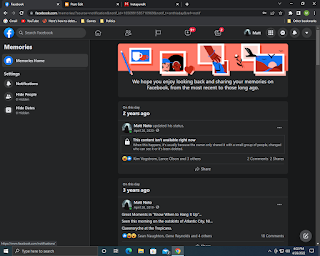