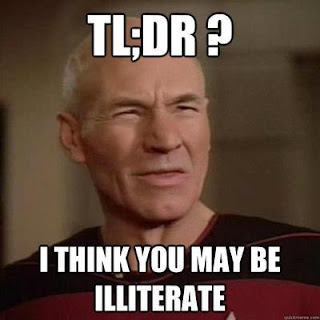 "Your assumptions are your windows on the world. Scrub them off every once in a while, or the light won't come in..." -- Isaac Asimov

"To argue with a man who has renounced the use and authority of reason, and whose philosophy consists of holding humanity in contempt, is like administering medicine to the dead, or endeavoring to convert an atheist by scripture..." -- Thomas Paine, "The American Crisis"

I'm sure we've all encountered this before:

For the internet-shorthand-challenged, it means "Too Long, Didn't Read" and is usually typed out by some ignoramus at the other end of the Intertoobies who is very much interested in shutting you down, but not if it means he has to engage his brain to do so.

It is a presumptuous little bit of nonsense. It is a club used by those who are intellectually disarmed and which coincidentally and unintentionally, proves their moron. How can you respond to any argument I've made if you haven't read and understood the argument first?

Generally speaking, what the little intellect is attempting to do is to simply express an opinion that he otherwise cannot justify by application of fact, reason or logic. It is an expression of feelings that largely consists of reading the first line or two of anything that has been written, divining the INTENT of the person who wrote it without context and according to their own very dim lights, and then spouting a piece of culturally- and socially-approved (by other morons) claptrap.

Then the offender simply sits back and waits to see how many "likes" he gets, satisfied that he has struck a blow...at what, he does not know. Because he hasn't read anything.

Typically, having garnered NO likes, or been shouted down, or instructed on the ridiculous position he has taken, the troll simply vanishes.

But never fear: he'll reappear when you least expect it, triggered once more by a word or a thought that he doesn't understand.

It is a simple formulation based on a need for self-gratification among mental midgets, and goes something like this:

Get triggered by the beginnings of a poorly-understood idea; openly admit that you're a close-minded idiot by stating you haven't any context for your response and are allergic to perhaps seeing an alternative point-of-view or even maybe learning something; shout empty slogans and pump your metaphorical fist in the air; wait for other similarly-handicapped anonymous idiots to praise you.

As always, the response begins with some variation of "I don't have time to read your novel".

But you have time to respond to it? (and it wasn't a novel: it was four paragraphs of about 20 sentences).

You have to admire the sheer chutzpah of such a limited mentality. You have to applaud the unadulterated audacity and smug arrogance of people who will tell you they haven't read that, but are convinced they have the definitive response to whatever it was they didn't read.

There's a term for this in mental health circles, but at the moment I'm not sure which disorder(s) are appropriate to describe it or applicable. Suffice to say, that if you find yourself living in a country where people like this are allowed to vote, don't be surprised if that country finds itself waist-deep in shit, figuratively and literally.

The internet was supposed to be a positive boon for Mankind, putting the collected knowledge of humanity at everyone's fingertips and allowing instantaneous communication across long distances, but it has turned out to be the stage upon which the world's Fucktard finally gets to play the leading role, and the saddest part of all is that even after a public exposition of their innate doofus, these kinds of people not only seem incapable of recognizing their own deficiencies, they also have no shame when such are pointed out to them.

As I was writing this, taking a break to catch up on the news, I came across this article today which neatly summarizes where the TL:DR mentality brings us.

You have to wonder what else has gone sideways because someone, somewhere, was either driven by agenda, too lazy to uncover fundamental facts, too ready to pass judgement to get the other side of the story, or was just too fucking Irish-Settler-level stupid to understand what was happening.

The leap to a conclusion without first understanding the intervening premise has become a nasty, ingrained American habit. It might the thing we are, sadly, best at these days...that, and whining like menstrual women when some minor and petty misfortune befalls us (usually a foreseeable result of the TL:DR mindset in action).