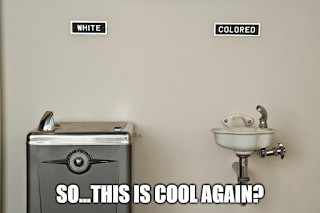 "I have a dream that one day little black boys and girls will be holding hands with little white boys and girls..." - Dr. Martin Luther King, Jr "I Have a Dream" speech.

Your Overlord is a great believer in the old adage that if you live long enough you will see everything. He's also a believer in the axiom that history repeats itself, although that is conditioned by circumstances so that the repetition is never exact, but often close enough.

I also believe in the maxim that if you gather enough truly stupid people together in the same place, the resulting flash from the explosion of asshole can be seen in distant galaxies.

And so here we are, in this year of 2021 and all of these precepts have proven themselves true. It is both disheartening and quite amusing.

Segregation is back in vogue. Only the Modern Segregationist is now the former victim of the Old Segregationist, clinging to and advocating for a New Segregation as a means of...I'm not exactly sure.

In the past, "separate but equal" was the hallmark of Jim Crow.

I refer to the New Segregation as "Jim Slow".

Because it is being carried forward by perhaps some of the dullest intellects we're ever likely to see. Most of these are charlatan race baiters and hustlers looking to make a quick buck and they are aided and abetted by the typical accessory-after-the-fact of the irrationally-guilty, white, upper-middle-class retard who is always more than happy to help the downtrodden remain downtrodden in the quest for a world without downtrodden.

For if we didn't have downtrodden the upper-middle-class libtard would lose all status in society and have no one to virtue signal towards as a means of assuaging their irrational guilt, and no one to take advantage of in what is to supposed be an act of penance for the "crime" of being born non-downtrodden without having to sacrifice anything of actual value.

Now, I'm not about to plumb the depths of the stupid in the formulation that people who fought -- and often died -- for the cause of Civil Rights should find themselves living in a world wherein the inheritors and beneficiaries of their struggle should suddenly reject equality as an act of "equity", or whatever they're calling it this week. That's a scary place; it takes a real, weapons-grade doofus to believe that any community can cut itself off from interaction with another, and prosper, particularly when the communities involved are interdependent in so many ways.

If I had to take an educated guess at why an entire generation of people would go through the trouble of biting off their noses to spite their faces, I would probably look to two "separate but equal" (see what I did there?) catalysts: Demographics and an Achievement Gap.

As to the first, I remember reading somewhere, many years ago, that according to the Census Bureau, by 2075, that African-American would become a "statistically insignificant" portion of the American population. This would be caused by increased rates of incarceration among young black males, shorter lifespans caused by things like AIDS, diabetes, heart disease, and escalating black-on-black murder rates, and finally, by increasing immigration from Central/South America, Asia and the Middle East.

Blacks would simply be outnumbered by newcomers who don't have the same social and economic goals, and who don't give a fuck about "the legacy of slavery", and so could not be shamed and browbeaten into a continuation of the "Black Power Structure" and the continuation of the welfare state where the African-American is the primary beneficiary. It also means higher and more-intense competition for jobs.

With the rise of other "minority" communities, the African-American would lose out by sheer weight of numbers, and everything they have "achieved" since 1865 is, will be, in danger of being erased. This means no more Affirmative Action that benefits blacks, no more "equal representation" achieved by gerrymandering congressional districts and then sticking party hacks whose chief value is their dumbfuck and reliable left vote in them. It means losing out on scholarships, federal funding and employment in which race is a factor in deciding who gets what portion of that which has been stolen from the majority.

In quaint phraseology, the African-American is fucked.

And then we come to the Achievement Gap, where despite decades of race-based preferences in everything from government contracting to civil service employment to deciding who gets into law school with a sub-standard LSAT score the results are mixed, at best (funny: we're not supposed to racially profile anyone because that's evil, but Harvard and Georgetown do it all the time, and claim it is an altruistic endeavor to put a retard in a institution of higher learning they'll never graduate from without a very steep grading curve and paternalism).

Though I have come into contact with many African-Americans in my business life who have the skills and smarts to do literally anything, I have also met -- more times than I can count -- the low-intellect, criminally-oriented, Urban Patois-spewing, pants-falling-down-around-their-ankles dipshit who hasn't figured out that literacy is a good thing.

Fuck, watch any episode of Judge Judy on any weekday afternoon and the parade of this type is both constant and often hilarious. Walk out onto the streets of wherever you live and the proof of the stereotype will (often, quite literally, and for no reason) punch you in the face,

Part of this, I reckon, is the dialectic employed by "leaders" in the Communitaaaaay in which, on the one hand, the African-American is somehow superior in all ways to the White Man, and, simultaneously, some sort of powerless victim. He is both a descendant of gods and a descendant of morons. He is capable of amazing feats in any field of endeavor and cruelly crushed beneath the thumb of lesser breeds. He is a being of pristine virtues living in a world of evil oppression, incapable of seeing his innate good overcome innate perfidy.

This is Cognitive Dissonance.

It is excuse-making elevated to an art form.

It has been a cultural poison.

It's also kind of a backhanded admission that the Confederates, the Klansmen, the Segregationists and the bigots might have had a point. Which makes it all-the-more embarrassing.

And in another example of "history repeating itself", the central tenet of the American Civil War was not -- contrary to popular opinion and propaganda -- the continuation of Slavery for the purposes of economic exploitation, but rather the question of what to do with (then) 4 million or so people who were about to be made surplus-to-needs by the Industrial Revolution, who could not be allowed to simply wander the landscape with no property, no capital, no education, no connection to Western Civilization, and ultimately, a series of legitimate axes to grind. Their labor was simply not going to be needed and their presence constituted a physical threat.

Nowadays, automation and the computerized, digitized, data-driven means of production have produced a similar dialectic. The New Economy does not require mere physical labor and low intelligence; it requires intense brainpower and has to fight for the (fewer every year) remaining brute labor jobs against vast hordes of immigrants and overseas coolies who are cheaper, faster, and very happy to call a dollar-a-day "oppression" because it is superior to the "starvation-every-day" oppression they used to live with.

The "solution" America found to these problems was to free the slaves and then to re-enslave them to the Welfare State. A nation $22 trillion in debt -- and counting -- can no longer afford to buy peace with extorted tax dollars and borrowed cash, and the New Welfare Set promises to represent far more votes than the old Urban Aborigine Set ever did. That edifice will soon collapse.

My own experience tells me that the problem is a failure to join the Common Culture.

Somehow, these mental midgets have come to the same conclusion, in a roundabout way, and so their solution to the problem is to reject the Common Culture in favor of a Segregated Culture -- which is largely only made possible by the existence of the Common Culture -- and that this new Segregated Culture, consisting of the very same people who have failed repeatedly, led by the same idiots who have produced the current results, will somehow become a success.

And be successful in a world that is ever-more interconnected than ever before while remaining uniquely separate.

Hey, if it works for the Amish, amiright?

History, however, tells a different tale. Societies that have attempted to separate themselves from the greater mass of the social system from which they sprang typically do not last very long, nor do they achieve much in the way of success. For a start, despite the insistence that insular autarky leads to Nirvana, the separatists are always -- ALWAYS -- dependent upon the greater society that spawned them. Mainly because it is only through the  tolerance of the majority that these societies are liable to spring up, and secondly by the cruel measure of economics -- there is no society that has ever been able to provide itself with all of it's own needs.

These small-scale societies-within-a-society also, eventually, almost without fail, become Enemies of the State in some way.

Even in "Atlas Shrugged" we never learn the ultimate fate of Galt's Gulch, do we?

The recent uptick in Anti-Semetism and "anti-Asian Hate Crimes" is directly attributable to this issue. The minority group that feels itself threatened strikes out at the other minority groups that threaten it the most, and the ones least-able to fight back. It is telling, for example, that "Black Lives Matter" does not trek it's collective ass into Appalachia, the Deep South, or even the Northern Suburbs (except in those cities, like Minneapolis, where the Whites have all been frightened into acquiescence or are desperate for the Black Vote), where there's a very high likelihood of a massacre that would make a 4th of July Weekend in Chicago look like a party.

The weak always pick on the weaker.

I don't think the people who are advocating for this New Segregation have thought this idea through very well.

Then again, if they were thinkers, we wouldn't have reached this stage of dimwit, would we?

I think the article can be summed up nicely by Forrest Gump: "Stupid is as stupid does."

a truer picture was never painted by better words
... admiration (& envy) of your 'wordsmithery', & your insight

Great analysis! Too bad it won't be read and heeded by those who are most affected by the current epidemic of stupidity.