We Interrupt This Blog for an Important Bulletin... 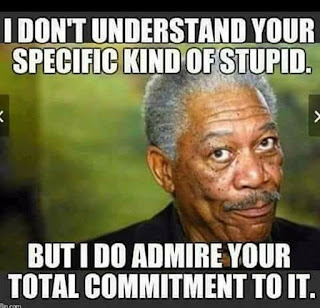 By the way, thank you all sooooo much for sending me a ton of e-mails to tell me you're the exception to every goddamned rule on Libertarian fucktard after I asked you not to. So not only are you a dumbfuck for being a Libertarian, you obviously cannot read or follow directions, either. The best (in terms of the most-poorly-spelled and incoherent) rant came from the guy who called himself a Christian-Libertarian. I can't wait to delve into that example of Cognitive Dissonance.

That's the problem with Libertarianism: it caters to the self-professed exceptions.

Might as well wear a sign that says "Caution: Severely-Weak And Damaged DNA, Do Not Attempt to Mate".

Definitely by the end of the week.

If it hasn't already come to your attention, Liberals, I want to alert you to something you need to know:

A lot of you are dumber than a sack of doorknobs and just about all of you need to shut the fuck up now.

Like the idiot I argued with last night who claims to have a degree in Anthropology (a real subject was too hard?) who insisted that the reason why many Africans -- who live on a continent bordered by two oceans, three seas, with three of the longest rivers on Earth and a fucking rain forest in it's center -- don't have access to drinking water is NOT because they're a special blend of dumbass, but because of "colonialism".

You would think an "anthropologist" would know that Africans are far too busy killing one another and raping children in an effort to avoid AIDS, that's when they're NOT busy making children they can't feed and chasing gazelles with a fire-hardened stick, to dig wells, collect rainwater, or stop pissing in the same stream they drink from.

Anyway, I will break down your retard on three specific issues for you, since for some of you a severe case of Autism would appear be something akin to a super power:

1. Trump - On January 21, 2017 I was informed that Donald Trump was an unmitigated Nazi, ultra-nationalist, xenophobe, America-Firster, only to be informed in the last two weeks, after a "disastrous" summit (adjudged as such by people who sold the Russians 20% of our Uranium supply, gave Putin a plastic "Reset" button with the word spelled incorrectly, and promised more "flexibility" after re-election, which included surrender in Syria) in Helsinki, that Trump is now a stooge of the Kremlin, Putin's lapdog, kissing Vladimir's ass, a full-blown Manchurian candidate member of the Comintern selling his country down the river.

And this is how cleverly the bastard disguised his true nature and how deep his cover is: while taking orders from Moscow, he got NATO to agree to increase it's defense spending, was killing Russians in Syria, and gave $200 million in arms to the Ukraine -- currently involved in a border war with Russia. This while the US military engaged in joint exercises with Finland, Sweden and Poland.

So, which is it? Because both can't be true.

In the meantime, what changed for the Left's opinion of him to switch so violently and for so many leftists to suddenly follow in lockstep with this "new" wisdom?

Yet somehow Strzok testifying before Congress that he's a bald-faced liar who attempted to influence an election to prevent the elevation of a candidate he didn't like, despite the revelation that the intelligence agencies and FBI falsified a FISA warrant in order to spy on his campaign, and despite the fact that Robert Mueller indicted 13 Russians he's never going to prosecute (and knew this before he did it) which are all beginning to -- finally -- undermine the "Russian Collusion" bullshit, you're just gonna double down on stupid?

We're going to ignore Objective Reality, dismiss facts, just wish really, really, really hard that what is untrue can suddenly be made true if you want it badly enough and make enough noise. Why, I'll bet some of you even prayed to make it true.

Listen I understand that sometimes The Lie is a component of political discourse, but this is getting ridiculous.


2. The Obama "Recovery" - unemployment at record lows, labor participation at historic highs, capital flowing, trade deals being renegotiated, and all some of you who really should be denied access to sharp objects have to say is "Obama's policies worked".

What the Ever-loving Fuck?

If you believe this, then you have to admit the following:

a) that if the recovery is, in fact, due to Obama's policies, then those policies took eight years to have an effect and then only kicked in AFTER he left office. Meaning nothing happened while he was in office. You would also have to believe this was by design.

b) if a) is true, then this makes a mockery of the propaganda that was vomited forth from the Obama Vatican for 8 years that the economy was THE BESTEST EVAH!, and all of us poor stooges were just too stupid to notice it while we were collecting unemployment, applying for food stamps and having the bank foreclose on our homes.

I'm sure by the time you guys are finished re-writing history according to what you WANTED to happen, instead of what actually did happen, Obama will have discovered penicillin, invented the airplane, wrote the Odyssey and built the pyramids all by himself (because obviously, Egyptians, you didn't build that).

3. Occasionally-Cortex - Speaking of leftist economic majors, there's Alexandria Ocasio-Cortez, poster child for the "It's a good thing I can suck a good one, because I'm too stupid to support myself and obviously will need a rich husband to stave off starvation" movement among "empowered" grrrrrls, the identity pimps and their beta-male faggot fellow travelers.

The woman couldn't even tend bar well, but somehow she's an economic genius?

One who can say, demanding to be taken seriously, that unemployment is low because everyone has two jobs and it never occurs to her:

a) Unemployment figures count people who are NOT working. Like, at all.

b) Socialism is still a bad idea, even if you put "democratic" in front of it. If you needed examples: Venezuela, Soviet Union, China, Cuba, Vietnam, Eastern Europe, India, South Africa, Nicaragua, Detroit.

This idiot went to one of America's elite schools -- Boston University -- earned two degrees, in economics and international relations,  and....somehow wound up bankrupt and tending bar...

Now, there's nothing wrong with tending bar. It's an honest living. But one has to wonder how good she was at it, considering her $70,000 a year "education". Because it would seem to me her real issue is not her politics, but rather that the Truly Stupid Gene is deeply embedded in her DNA. You can see it; fuck, I can almost smell it and I've never been anywhere within five miles of her.

But, wait, it gets better.

The international affairs degree-holder begins a dissertation on the Arab-Israeli conflict that even had the Palestinians going "what the fuck?" and upon FINALLY noticing the Truly Stupid Gene kicking in suddenly admitted she wasn't an expert in geopolitics.

This is what an "elite" university turned out?

It gets even uglier when the spoiled rich grrrrl from idyllic Westchester tries to pretend she's Jenny from the Block, a real boriqua who buys coffee in bodegas, eats pastelillos and maduros every day, and wears that hair net thingy while hanging out on street corners soliciting every cute Papi in a wifebeater who passes by.

This is "the future" of the democratic party. I'm told.

Really? Because what I'm seeing is someone too stupid to understand how stupid she REALLY is, talking out of both sides of her mouth -- and rectum -- simultaneously, probably an Affirmative Action enrollment at one of America's premier colleges, lying about her personal background and the only thing I can think of is....Obama....Hillary...John Kerry.

How long before she starts regaling us with tales of dodging sniper fire, being decorated for self-inflicted gunshot wounds in Vietnam, her racist grandmother, "composite" girlfriends in ghost-written autobiographies and insisting she's the perpetual victim of her own shadow?

Seems to me I've seen this movie before.

The world does not produce enough Wellbutrin to fix this sort of mental disorder.

And I understand; if you don't just blindly follow along, arrest your critical thinking skills like everyone else and jump on every bandwagon, then you won't have any friends, but at what point do any of you start to feel the shame that comes with being THIS FUCKING RETARDED?

Defiantly retarded, I might add.
Posted by Matthew Noto at 10:30 AM

Heh. There is "ethnic", then there is Westchester "ethnic".

I want to see her rollerskate, chew bubble gum, and talk geopolitics on the View. Forward!