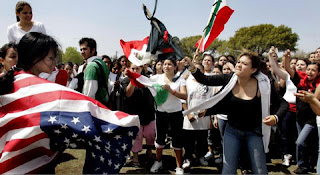 "There comes a time when it must be realized that the bulk of Humanity is just too stupid to be left alive, and it is at such moments that you desperately wish you were allowed to kill the Stupid just as soon as it self-identifies." -- The Overlord.


As I write this, tens of thousands of total fucktards are marching in America's streets in favor of unfettered illegal immigration, something that will adversely affect them all.

To be fair, some of these total fucktards are unaware this is, indeed, what they are marching for; they're marching because their thinking hasn't taken them as far as "what is the consequence?". Those people are usually hung up on some other idea that has acted as a roadblock to further cogitation on the subject.

They may believe they are marching "to keep families together".

They may believe they are marching for "Human Rights".

Some may be marching under the pitifully retarded idea that they are marching in defiance of a President they don't like, assuming that anything he is against is something they should be in favor of.

Naturally, the people who organized all these marches, who have drawn all these people out to essentially fuck themselves over, are quite aware of WHY the marches are taking place, but will not come out say so, because that would give the game away.

If there weren't any dumbasses just begging to be manipulated emotionally there'd be no need for liberalism, after all.

What strikes me as peculiar (but not surprising) is that if you asked many of the people taking to the streets today to describe their country, you'd get something that goes like this:

"America is a racist, sexist, homophobic place. People O' Color are routinely executed for merely breathing; a women is being raped every second of every day, and if she isn't being actively raped (and then forced to have the child she doesn't want that may result), then someone is actively contemplating raping her. Homosexuals are being beaten in the streets all the time.

It is a place where the Rich Get Richer and the Poor Get Poorer, and when the Evil Capitalist isn't exploiting the Proletariat by terribly oppressing and underpaying him and stealing his "fair share", he's eating his children and selling his organs for profit.

It is a blatantly unfair society where there are two (or more) systems of laws, one for the Wealthy and One for the Oppressed, and the Oppressed are always on the wrong end of "Justice". We build prisons specifically to house the Poor and then make up crimes to justify their incarceration. In fact, we commit crimes (Hate Crimes) against people for just being who they are, and then imprison the innocent, anyway.

You can be shot by a rabid right-winger at anytime. Our schools are underfunded and undefended. Even the wildlife has guns here, because the NRA controls everything and everyone. We live up to our collective armpits in filthy water, dirty air, thanks Big Oil, and we are forced to eat poisons produced by Big Agriculture and Fast Food, Inc, that is when we aren't being alternately turned into addicts by Big Pharma, or killed by the outrageous prices Big Pharma charges for drugs. Our medical system stinks on ice because doctors are bandits, most likely to kill you and then be exonerated by a biased judicial system.

Wall Street stands by, like a flock of vultures, prepared to steal everything you own or will ever earn.

Our political system is undemocratic; it is unfair; it is archaic and your vote will not count. Votes are suppressed everywhere, every day, especially if you're a Person O' Color. Your voice does not count, since the criminal political party currently in power refuses to acknowledge your existence except to demonize you and galvanize it's hatred around you.

The Supreme Court will soon be be packed with ruthless racist misogynists who will take away the rights of women and minorities. America has never changed: it's still 1948 here...wait, I mean 1848 here...no, I mean 1748... the buildings all look different and we have air conditioning, but slavery is still just around the corner, just waiting for everyone not a white hetero male. The Rule of Law no longer holds sway here.

We discriminate against people, constantly. We are a nation of haters who have no love or charity in our hearts. Everyone in America is a greedy, miserly bigot (who rapes women, hates minorities and shoots up schools) who would rather kick a beggar than to help one.

If you do come here, you WILL be persecuted because of your religious beliefs, sexual preferences, skin color, economic status, lack of education, and the white hetero male will probably appropriate your culture, too. Besides, your culture is superior to ours, anyway.

There is no freedom here; only the dictates of an Orange Mussolini. You will be forced to conform, your children will be indoctrinated in the ways of the White Man against their will; you will never be rich; you will never be safe since everything in this country either gives you cancer, or will kill you, or works for the NRA.

And it's all being led by an Orange Fascist Nazi Dictator who wants to build concentration camps, march people to the ovens (when he doesn't want them to die from AIDS, or be killed by racist cops, or get shot in school, or be raped to death in the rape camps, sorry, I mean "Colleges"), who will lead the world to nuclear holocaust and collapse the world economy, complete with his own retinue of Goerings, Goebbels, Himmlers, and Mengeles."

My, they make it sound like such a horrible place, you wonder why anyone would ever, in a billion years, want to come here?

In which case, JUST WHAT THE FUCK ARE YOU MARCHING FOR, DIPSHIT?

To invite more people to come and suffer?

And why haven't YOU left yet, you fucktard? No one is keeping you here against your will, after all.

I have said it before, it bears repeating:

To be a leftist you must be insane.
Of course, the reasons why the marches were organized to begin with are easy to discern:

Having failed to kill the Trump Presidency with a fake charge of "collusion", any issue that can be made to make Trump look bad -- and erase the memory of the previous eight years of abject failure -- will be trotted out.

Having failed to win at the ballot box, the left needs more votes in states it lost, and doesn't care where they come from.

Having failed in life and been unable to find legitimate employment, thousands of "activists", "community organizers", "political advocates", and so forth, need donations.

In order to give the appearance that what they advocate for is actually the popular will of the people, the Left needs regular demonstrations of it's ability to gin up massive numbers of complete numbskulls to produce an image of power and influence on television.

As for the consequences, the very people who are marching right this very second are the ones who will suffer them first. Like when their kids come home with exotic diseases gained from contact with the Great Unwashed, or their school is so overflowing with foreigners who don't speak the language that their own kids start to suffer.

They will notice the problem when they need an Emergency Room and find it stuffed to the rafters with people with unidentified rashes, awaiting treatment for the results of drunken broken bottle fights, full of sniffling, filthy children coughing their brains out, and then have to pay an astronomical bill for the relative paucity of treatment they received in order to pay for everyone else's.

They will understand the sheer dumbfuck of what they have advocated when Pedro and Pillar, Mohammed and Madiha (and his other wives Fatima and Tabalah), or Abiyoe and Afia replace all the Whole Foods with Tacqurias, accidentally detonate and spread anthrax through the neighborhood while building their bomb, or manage to begin a mini epidemic of dysentery (or worse) in town because they can't stop eating expired and illegally-smuggled bushmeat.

And then, get this: the people you've marched in favor of will come here and demand that conditions in this country change until they resemble conditions in whatever ungodly shithole they fled from. It will not matter to them that you marched in their favor or on their behalf, you will still be subject to Sharia (first step, mutilate the women, wrap them up in carpets, and then beat and rape them at will) --- yet another system of law; demand that you learn their languages and accept some of their more archaic customs, like defecating wherever you feel like it, dressing in ways they approve of, eating dogs and cats, demanding separate public accommodations, and, oh yeah, wanting more of your money in the form of welfare.

And they will get it, too, because since you marched to let them into this despicable re-enactment of Nazi Germany (that you still haven't left), they were able to bring their relatives over, too, and soon, they'll outvote you and destroy the institutions you denigrate but depend upon.

But, you can console yourself that you were on the right side of history right?

You failed to mention that marching is the adult version of a temper tantrum.