Ten Indications You Might Be A Big, Stinking Drunk... 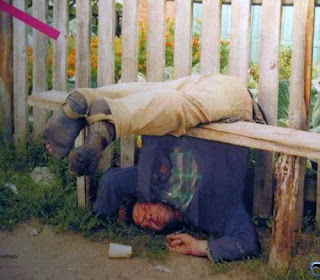 "There is no Devil; there's only God when he drinks." - Tom Waite


The Subject came up again the other day: the question of whether addiction, of any sort, is a disease or a result of unresolved mental disorders.

From personal experience, for Your Lord and Master has not always been the upright (as he was often horizontal and passed out), morally-superior (as measured against, say, an alley cat), paragon of virtue (as compared to Hillary Clinton) that you have grown to know and (been commanded) to love.

He was once a drunkard.

Yes, I know: you're shocked! Dismayed! Saddened! Gobsmacked! Fuckstammered! But, alas, it is true.

My life between the ages of 18 and right around 37 is a sordid tale of a contentious relationship with the bottle, mind-staggeringly stupefying immaturity, and a laundry list of unresolved mental traumas and learned behaviors that led to but one place (see: Indication #10, below).

For the record, I am not embarrassed to admit to this failing, nor to do so publicly on this forum. The subject of addiction is too important, considering lives are literally at stake, to only be spoken about in hushed tones in dark corners. It is my belief that the more the drunks, the druggies, and the self-destructive "come out", as it were, the more lives can be saved or salvaged. Successful recovery all but places a responsibility upon the shoulders of the saved to do their level best to ensure others know it is possible. To let others in similar circumstance know that there is someone who can help them, that understands their issues, and who can not only sympathize, but empathize, with their plight.

This responsibility also ensures that when dealing with the afflicted, you know their dodges and excuses, and so will not take or fall for their bullshit, either.

To those who say addiction is "a disease", I say, "if you're not going to help, then at least have the decency to shut the fuck up".

Diseases are caused by germs; they are caused by viruses; they are the result of exposure to toxins, pathogens, the end-product of bad genes. Addiction is none of these things. Those who consider it "a disease" will point to "studies" which say that addicts have a genetic pre-disposition to certain behaviors, but then they totally ignore the people who have the same "pre-dispositions" and never touch a drop or light one up.  People who will pronounce addiction as "a disease" will often, when no one is within earshot, admit that they are selling a load of horsecrap, but believe that lying to the addict in order to get them into recovery is actually a good thing. Religion does this, too; the idea that God (who doesn't exist) loves and accepts you for your faults, is a powerful drug to people who, largely, are in this position because they feel unloved, unwanted, and unaccepted.

Line up every drunk and druggie you know, and make a list of their observable (and obvious) issues. You will find the following things in common:

1. Lack of maturity
2. Lack of impulse control
3. Depression
4. Anxiety
5. Low Self-esteem
6. A bad decision-making process
7. No coping skills
8. Some unresolved trauma, usually occurring in childhood.
9. An inability to understand/recognize the patterns of behavior they are engaged in, and are continuously repeating.
10. A propensity for self-delusion.

And not a germ or "bad" gene in sight.

If you doubt all of that, then think upon this: happy, well-adjusted people with abundant self-confidence usually do not become drunks and drug addicts.

That list is representative of the behavioral and mental disorders underlying addiction, which can be easily identified and corrected with the proper therapy. Not the revolving door type of the 28-, 60-, or 90-day "rehab" (which largely doesn't work because it's not targeted at an individual) but the sort of one-on-one, deep-talk therapy in which the addict eventually makes his/her own discovery as to why they drink, inject, or snort. Only when the addict understands his own stupid can he take meaningful action to correct it.

In the meantime, as a public service, here's a list of behaviors and circumstances that may indicate you have a drinking problem. If you ever find yourself in similar circumstances, get yourself a really good therapist.

Indication #1. You walk into one of your favorite bars. You have several. Before you can order, the bartender hands you bill =for $300 -- the one you forgot to pay the last time you were here.  You ask him "Why did you keep this? Why didn't you call the cops on me?" and he answers "I knew you'd be back." This happens to you at least every other week.

Indication #2. You walk into one of your favorite topless bars. You have several. Before you can order, you notice that of the ten or so young ladies currently "dancing" on stage, you know seven by their "real" names; you have carnal knowledge of at least five; one is jealous of the other four and is causing  a scene. The bartender hands you a bill for $400 -- the one you forgot to pay the last time you were here. You ask her why she kept it or didn't call the cops, and she responds "We knew you'd be back." This happens to you at least every other week.

Indication #3. It is payday at work. It is also, by happenstance, the day your bonus check comes in. By another happy coincidence, it is also your birthday. So, you cash your checks at payroll, and leave the building with $14,000 in cash in your pocket, determined to celebrate your natal anniversary. You enter the watering hole/nudie joint/possibly both (you might not remember) of your choice. You wake up the next morning in your bed. You do not remember what you did the night before; you do not know how you got home. You look down at the mass of blond hair sleeping in your lap. She does not look familiar, so you wake her up. It is now that you discover she does not speak English. You check your wallet and discover you have $3,200 left. Upon reflection, you remember this has happened to you several times before.

Indication #4. You are hammered. Absolutely plastered. Barely capable of keeping your eyes open, certain you are on the verge of alcohol poisoning. You get in your car and drive home. You pay the toll at the bridge, and then the next thing you know, you're driving on the shoulder at 60 mph and have just woken up at your exit. You do not remember anything after the toll. You are certain this has happened more than once.

Indication #5. You are hammered. Absolutely plastered. Barely capable of keeping your eyes open, certain you are on the verge of alcohol poisoning. You get in your car and drive home. Before you arrive, you notice the flashing lights in your rear-view mirror. You have just enough awareness to pull over. This is when you begin a mental inventory of the evening's consumption:

And decide that tonight is the night you're going to jail.

The officer gives you a field sobriety test. You pass with flying colors. The officer asks you to blow into the breathalyzer, and you blow below the legal limit. The officer bids you be careful and to have a good night. This is when you discover that you either have a God-like liver, or merely have adapted to functioning at a very high level while inebriated.

Then you discover that the four packs of cigarettes you smoked while getting shitfaced most likely threw the breathalyzer analysis way off.

This has happened to you four times, that you can recall, and one you can't, but your friends were all there and they witnessed it.

Indication #6. You have awoken for work. An hour late. You cannot face the day with this hangover, so you have a shot to even things out, and then have your morning coffee. You get to work, eventually, and perform brilliantly until lunchtime, when you require a few belts to get through the afternoon. The work day done, you stop for a drink on the way home. After arriving home, you need two or three more drinks in order to go to sleep. This is your daily routine. Repeat ad nauseum.

Indication #7. You notice a collection of empty bottles building up in the house. Beer bottles; whiskey bottles; bourbon bottles; vodka bottles; gin bottles. You notice a Kahlua bottle, which seems out of place. You try to remember when you bought that, and when you drank it,  but can't. You crack open another  bottle of Canadian Club (taken from the case under the kitchen sink, next to the case of Absolut, also under the kitchen sink), pour a few and try to think what on Earth possessed you to ever drink Kalhua. It pisses you off that there is a Kahlua bottle in your house, and you wonder which one of  the slatternly trolls you've been bringing home had the goddamned temerity to bring a fucking Kahlua bottle into YOUR INNER SANCTUM, the bitch! This whole thing has you so wound up, you need another drink. This happens frequently.

Indication #8. You are an hour (or more) late for work (again). Your boss, who has been willing to put up with your chronic and egregious lateness for quite some time (often years) because of your value to his team, is no longer indulging you. You are fired. You get a new job within two weeks. Within a few months, you are fired again, for the same reasons. So, you get a third job in a year, with the same results. You are convinced the world is out to get you, and everyone else has a problem but you.

Indication #9. You are sitting at home watching television. The doorbell rings, so you answer it. Standing there is some woman who looks vaguely familiar. You don't know her name, though. You notice she has a suitcase, perhaps more than one. She asks if she can stay "a while" until whatever her problem is blows over or is solved. She's sorry she showed up on your doorstep, but you never gave her your phone number. You ask the obvious questions; you discover she's another drunken conquest, and is a bigger drunk than you are. She stays a month and somehow manages to drag the drama of the diseased corpse that is her life and lifestyle  -- including ex-husbands/boyfriends/girlfriends/Labrador retrievers, and the Police --  into your private garden behind her. You notice the empty bottle collection has gotten considerably larger. You are certain this has happened before.

Indication #10. You have been on quite the bender. The only thing you remember is the contest involving Tequila shooters, and having won it. Oh, and the Jello shots. If you had forgotten, then having thrown up the tequila-soaked-Jello-colored sandwich you shoved down your throat at some point reminds you. You take stock of your surroundings; you are still in your car. You are in your driveway. The sun is higher than you would expect it to be for early morning, check your watch and discover it's nearly 1 pm. The engine is still running; your foot is on the brake; the car is still in gear. You have no idea how long you have been here. You do not recall getting into your vehicle and driving home. You are certain this is not the first time this has happened.
Posted by Matthew Noto at 8:43 AM