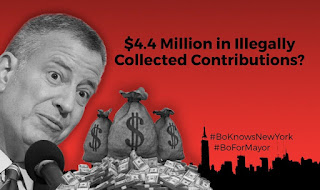 "If a man will comprehend the richness and variety of the universe, and inspire his mind with a due measure of wonder and awe, he must contemplate the human intellect not only on it's heights of genius but in it's abysses of ineptitude." -- A.E. Housman

Oh, people of New York, how blessed thou art!

Normally, this screed would have been reserved until the week was actually over and the results of The Overlord's exacting process were completed before it was written, but the Goddess of Douchebag has been overly generous this week, and provided a winner so obvious as to make this unnecessary.

It is no secret that here in this corner of the Universe, Comrade Billy is not very popular. In fact, if you took a poll asking the question "What is the WORST thing that could ever happen to you?", Red William (real name is Warren Wilhelm, Jr. Like most communist dictators, he's had to change his identity in order to avoid the Forces of Rightousness throwing his ass in front of a firing squad, see: Lenin, Stalin, Tito, et. al.) would probably come in first, and having beat a very long and distinguished cast of runner's up that would include:

Having an Umbrella opened up your ass

Discovering your wife's torrid sexual affair with the neighbor's dog.

By a country mile...

In the time that this schmuck has been the Mayor of New York City, we've discovered that Homelessness is a Human Right (so long as his friends don't have to see it) , which carries with it concomitant rights to defecate in the street, use taxpayer-provided, street-side internet kiosks to surf porn while masturbating to same in public; that it's quite okay to openly take bribes from the capitalists you DO like so long as you do it in full view of the populace and don't pretend as if you have some greater virtue; that the schools are really nothing more than a taxpayer-funded daycare center with free meals for the Welfare Set; that ownership of an automobile will mark you for persecution by the Leftist Goon Squads; that the solution to a wildlife management crisis is birth control for deer; that criminals are a potentially untapped voting bloc; and that you can be as obnoxiously racist -- so long as the targets of your opprobrium are white -- as you wish, so long as you hide behind your black wife, who, incidentally, you've put on the payroll in a bullshit job that takes advantage of her best qualities, which can be summed up, as follows:

1. Being black
2. Being stupid
3. Being unqualified to chew gum and walk at the same time
4. Making Hillary Clinton and Michelle Obama look like rational beings by comparison.

The ONE THING that always stands out about Comrade Dingleberry, however, is his ability to fuck up by the numbers and then take to the press to blame everyone else for the resulting -- and foreseeable -- failure.

This week's disaster is rats.

Which was a topic of last week's disaster here, too.

The City of New York has been engaged in a war to the death with the common rat for centuries, now. At one point, it was decided that the only way to win was to exterminate the enemy, annihilate him completely, and to ensure that his kind could no longer pollute the Earth with it's foul presence. For years, the City has gone to great lengths (and great expense) to kill rats, and for good reason; they are carriers of disease.

And not the "good" diseases that liberals like, either (those would be AIDS, gonorrhea, clamidya, and all the other maladies which are the result of immoral behavior), but stuff like plague, and hantavirus, rat bite fever, leptosporosis, LCMV, typhus, salmonella, which is to say, diseases which would not have been covered by ObamaCare, not to mention their role in spreading ticks, fleas, and so much more.

The City had been "winning" this war, after a fashion, in that it was becoming rare to actually see rats, anywhere, except the subway. But no more.

Because Warren Stalin, Jr. and the (Flea) Brain's Trust he dragged into City Hall with him, had a better plan than the one that was working. It would be a masterstroke of managerilaist politics, touching upon a variety of voting blocs, and would allow for a process whereby Friends of Ours -- you know, some of the people who bribed us in broad daylight -- could scoop up lucrative city contracts while having to do nothing productive in return.

The Rat would no longer be killed by poison (because that pissed off the Animal Rights Crowd, who vote); the Housing Projects would be rendered Rat-free (to the detriment of surrounding neighborhoods, and really, fuck them; they're white, and welfare queens vote democrat); the abatement of the pernicious Rat without recourse to killing them in great numbers would be a visible symbol of the city's commitment to providing good services, in an efficient and smartly-planned manner, that would be a shining example to all of those idiots out there who say Communism never achieved anything.

In fact, The Plan for ridding New York of Rats is eerily similar to the one used to rid New York of the Homeless. That is to say, when the rats (or the Homeless) start to congregate in numbers large enough to make their presence both visible and annoying to either the tourists or the solons of the Upper East Side, then they must be shuffled along.

You can see this program in action every day at the Port Authority Bus Terminal, or the Staten Island Ferry, for example, where both Homeless and Rats proliferate. They gather in numbers large enough to be noticed; someone in authority comes to roust them and get them to leave. No one cares where they go, they just can't be HERE, and not during daylight hours.

And so the same paradigm was applied to the rat problem. Just as we don't kill the Homeless, we just make them move on, we won't kill the rat, and likewise, point him towards greener pastures out of the eyeball range of the upper crust.

The Rat abatement Program, simplified, works something like this:

A bunch of contractors stands around a building; another group of contractors locates a hole that may be used by rats to enter said building. The hole is pumped full of dry ice. The resulting cold and depletion of oxygen forces the rats out of their nests. The contractors who were standing around the building take note of where the rats exit. All the holes, then, are patched up.

This renders the building presumably rat-free, but the rats are left alive to populate the next building. Or the next neighborhood.

Or that's the theory.

Naturally, because Bill likes to run New York as if it were Moscow-on-the-Hudson, when this program results in a spectacular failure -- measured by an INCREASE in rat complaints -- it's not the Politburo's fault. It's always an "unforeseen contingency", or "bad luck", or the same-old blame-the-victim formulation which has borne many names over the years, like "hoarders and wreckers", "reactionary elements", "lackeys of the imperalist capitalist yellow dogs",  and "bitter clingers".

No, the reason why this brilliant mismanagement of city resources undertaken for political, not practical reasons, has failed is because WE have failed it. We, the People of New York, have been insufficiently orthodox; we have not correctly divined the Original Intent of The Designers (which changes with each new charge of incompetence), no, the fool-proof plan has failed because we have decided to become better fools.

The Party's Five-Year Plan for Rat Abatement isn't a fantastic disaster because it was undertaken with methods which were poorly thought-out and guaranteed to fail, but because we insist of doing stupid shit...like feeding rats and playing with them.

And, true to form, just like when every other program of shit-for-brains cooked up by someone with political leanings to the Left of Castro come crashing down with a thud, the excuses for failure , whether we're discussing feminism, rats, homosexuals, guns, obesity, or what have you, are always the same:

1. We need more (re-)education
2. The public needs to be told not to do what they already know is obviously wrong
3. Fines will be handed out to "violators" (most of whom will be innocent victims of circumstance)
4. No discussion of whether valuable city resources and manpower have been misallocated, not to mention the misappropriation of taxpayer money, will be entertained or admitted
5. A 98% failure rate will be spun as a 2% success story
6. The agencies involved will claim they cannot complete their mission because they are understaffed, underfunded, or their mandate is insufficiently broad, which can only be repaired with a program of doubling down on failure.
7. Anyone who continues to make noise on the subject will be reminded that the beatings will continue until morale and attitude improves. This will only work if one is sufficiently enthusiastic about it, even if they're only pretending to be enthusiastic.

In the meantime, the agencies who should have been doing a better job at trimming the rat population -- the Sanitation Department, the Board of Health, the parks Department, the City Housing Authorities -- escape their fair share of responsibilities.

After all, they're only "following orders", and everyone knows that if you have a city job -- and would like to keep it -- you don't do something stupid like question the dictates of the Dictator.

But what can we do? This manifestation of mental illness disguised as wise superintendence is par for the course for people like DeBlasio. Suffering from a range of defects that begin with the unhappy childhood of abandonment by his father (who recognized a mistake when he saw one, and thus, disavowed it); the soul-damaging, mind-altering Hippie experience of the 1960's; the self-evident self-loathing which has influenced the man to hate his own kind (that is, White Male) so as to marry an emasculating hellion who, on a good day, might be qualified to replace Aunt Jemima on the box; the intellectual black hole that comes with an Ivy League education, and the adherence to an ideological system that been tried-and-failed so many times over the last century that one must assume it's not about politics, but religion, with some of these assholes. What did you expect?

Any system is only as good as it's weakest link. It just happens the weakest link managed to get elected.

Did you expect a New York Liberal who out-liberalled Andrew Cuomo to be smart? To be effective? To be efficient? To give a damn about the future consequences of policies that are explicitly designed to affect the here-and-now? Did you believe that when yet another liberal denounced the evil of  the capitalist system that he was unaware that he only survives because of it, and would not be willing to use it to his advantage while simultaneously disadvantaging everyone he dislikes?

Because if you did, then you're a fucktard. If you believe "it can only get better" then you're an unbelievably stupid fucktard.
That kind of stuff is de rigueur for democratic politicians. It's on Page One of Mao's Little Red Book.

If Bill DeBlasio does serve any USEFUL purpose, it is this:

He will be remembered (if only to be immortalized on the Men's Room Wall at the Port Authority) as the anti-Pied-Piper. As the man who destroyed New York City by handing it back to the worst monsters that Nature has ever produced -- the rats, the welfare queen, the homeless, and the stuffed-shirt-virtue-signalling-brie-eating-in-love-with-the-smell-of-her-own-farts snob.

And so, for actions in the service of Higher Douchedom, we present to you, Comrade Warren DeBlasio Jr, (or whatever the fuck your real name is) the distinguished Douchebag Cross, First-Class, with Rat Testicle Cluster.

In the meantime, I'll be sending you all the dead rodents I manage to trap...with love.