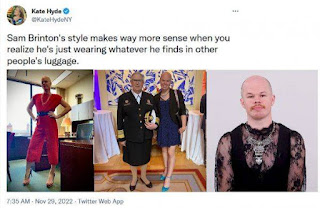 "If you ever wanted to imagine just what your own asshole might look like after a marathon Mexican smorgasbord, followed by a 24-hour high-pressure enema, and a forced, un-lubed colonoscopy all happening at once, just think of Anthony Fauci on the witness stand..." -- The Overlord

Speaking of Doctor Dumbfuck, it appears as if Doctor Death is about to get the figurative lynching he deserves (although I hold no actual hope that the result eventually matches said appearance. Bureaucrats and lawyers have each other's backs, after all).

The American Mengele was deposed this past week by the Attorney Generals of the states of Missouri and Louisiana regarding the Pandemic Shutdown Decrees. The states' cases revolve around the constitutionality of federal decrees proclaimed and ruthlessly enforced during the Pandemic, how federal authorities came to formulate them, and whatever gave them the silly idea in the first place?

Because none of it apparently worked, and we're still forcing people to get vaccines we know are ineffective, untested, and perhaps highly dangerous (as an aside, if you haven't seen this documentary, "Died Suddenly", you should. It's a frightening theory).

The states, I believe, are seeking restitution for the losses -- both of people and taxpayer money -- suffered during the Fauci-esque Night and Fog proclamations, as well as attempting to expose something of the truth of the origins of COVID-19, Fauci and his bureaucracy's involvement in the whole sordid mess, and what personal responsibility, if any, Fauci, himself, bears for the entire shitshow.

And suddenly, the man who is supposed to be the foremost expert in epidemiology in America, the un-elected Gauleiter who subjected us to daily briefings (brow beatings) chock full of misinformation, deceit and flip-flopping, and who wrapped himself in the mantle of Scientist ("I am the Science", he once (in-)famously boasted)...can't recall a fucking thing.

He's suddenly stupid. COVID-19? Never heard of it. Science? What science? I'm not a scientist, Bud, I'm just a bureaucrat.

Just as Fauci brazened out the ill-informed, ill-prepared and disastrous implementation of the draconian COVID "response", he's now attempting to brazen out any legal repercussions from his gross incompetence, and alleged ill-gotten financial gains from same.

We have become conditioned in this country to "trust the experts", and yet, over the last 50 years of my life, the experts are so usually, predictably, catastrophically wrong. When finally cornered or caught, these idiots then either do one of two things:

a) They claim stupidity.

b) They defy anyone to get them to tell the goddamned truth.

There are certainly times when one should heed the advice of an "expert", naturally. Like when, say, playing with fireworks and gasoline, or getting your engine repaired, or when your sewer line backs up into the basement, but one should always take great pains to avoid taking any advice from an "expert" who works for government.

For the simple reason that if they truly were that "expert" they'd be making a figurative killing in the private sector, and not a literal one from behind the podium of a government press conference.

True experts do something useful and remunerative that people will willingly pay for; fake experts who managed to get a 62 on a Civil Service Exam live by extraction from the taxpayer.

I am not pronouncing upon Dr. Fauci's guilt or innocence here: I'm simply saying that a man who so obviously has lied about everything from masks to medication, vaccinations to pandemic control, and with a track record that includes failures such as AIDS, Zika, Ebola and now COVID, should probably be hounded from the public square, if not tarred and feathered.

On another note, regarding the photo above, it is of Sam Brinton, the current Deputy Assistant Secretary of Spent Fuel and Waste Disposition for the Department of Energy.

Yes, you got that right, Minions, that whatever it is is in charge of Nuclear Waste in this country.

Now, Sam made headlines some time ago when he became the "first transgender whateverthefuck" in the Department's history, and this being 21st Century America and the Biden Administration, much ado was made over the fact that Sam's confusion over his own genitalia was a great day for all Americans, and probably an event on par with the parting of the Red Sea, The Miracle on Ice, and VJ Day, all rolled up into one.

In fact, because Sam can't tell his Loonies from his Toonies (as they say in Canada) vis-a-vis his wedding tackle and it's proper usage, it's better than anything that has ever happened or ever will happen.

Another government "expert", except that one gets the distinct impression that Sam's major qualifications for this job is that he ticks off yet another bureaucratic box, makes for great publicity, and essentially inspires every other demented, confused, mentally-ill fucktard in the country that if you work hard enough, wear a fucking dress (and probably suck the right penises) you, too, can get an extremely well-paying, low-expectation job with the federal gubmint.

And in another first, Sam became the first American transgendered cabinet-level bureaucrat to be charged with a felony in quite some time.

Because Sam has a penchant (fetish?) for stealing other people's luggage.

Which led one internet wag to post that pic and caption above.

This is not just a common occurrence incidental to government activity-- getting really fucked up, stupid-but-well-connected-people into government jobs; it's becoming an art form with the Biden Administration.

When you consider the parade of dumbfucks, abnormals, doofuses, and fuckups this Admin chooses to put into positions of power, based on little more than political correctness and appearances, it becomes very clear that this is not an accident.

Start with Kamala, move through Ketanji Brown, Pete Buttigieg, Rachel Levine, Nina Jankowicz, and now this fucking winner, and a distinct pattern emerges which should give a clear indication that not only does stupidity predominate in American Government, but now there's enough stupid people safely ensconced within it to ensure that every fuckwit in the nation gets a high-paying, taxpayer-funded job.

Sam may need one of these newfangled Vagina Manuals for the Recently Male.

I saw an advertisement today that left me shaking my head.

Duracell is advertising that their new-and-improved batteries now come with a non-bitter coating.

And that led me to ask myself:

Who the fuck is TASTING them?

There are certain things that one should NEVER put in one's mouth, certainly, and one would believe that batteries -- devices for the storage of electricity, or anything having to do with electricity, for that matter -- just might be in the Top 50, at least.

Now, maybe I'm being the dumbass here and I'm missing something (like context) but when you advertise a battery as if it were something tasty and edible, I have to start to think that we have a lot of truly stupid people out there that necessitated just such a thing, or maybe someone is suggesting that copper-top batteries should be a part of your daily dietary regimen.

This makes the simpler times when all we had to worry about was kids eating paste or paint chips seem so fucking quaint and anachronistic, and yet, it fills one with a melancholy for a much-simpler time, doesn't it?

An interesting video that I found on YouTube. Boenhoffer's Theory of Stupidity.

I had heard (really, read about) Boenhoffer before, but must admit to never having read his magnum opus, except in excerpts or snippets. I think I'm going to do so now.

Before I close, I want to thank everyone who stops by here regularly and reads my mental regurgitation. I can now also be found in audio form over The Idiot's Perspective podast, where my co-host, Joe Rice and I, discuss the burning issues of the day as only Native New Yorkers can. You can find it on every podcast platform currently available.

Please stop by and give a listen?

Daddy, are more people good, or are they bad?
They are dumb, son. Dumb.

--
Never argue with idiots
First they drag you down to their level.
Then they beat you with experience.

Best regards and have a nice weekend!

Hopefully you had Jose Ferrer's voice as Lt. Greenwwald in your head as you typed that, because I sure read it that way.